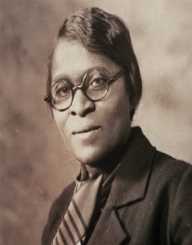 Charlotte Hawkins Brown is one of America's daughters who was born in the year 1883, on June 11th. Also, she was born in Northern Carolina and went to Massachusetts for her education. She later went back down South Carolina to educate the Africa-American children. In her life, she became a teacher and author. Also, she was the founder of the Palmer Memorial Institute in the year 1902. The Palmer Memorial Institute was a Southern prep school for black and colored students in America. In her lifetime Charlotte Hawkins Brown got to travel the world and became a suffragist. She lived till the year 1961 when she passed away.

Charlotte Hawkins Brown was born in the year 1961 in Henderson, Northern Carolina, in the United States of America. Charlotte Hawkins Brown was the daughter of Caroline Frances. However, her father was never in her life. Also, Charlotte was the granddaughter of former slaves. Charlotte’s birth came at a time when most of the black families were moving north. So, just like most of the African-American families, they also moved north. In the North, Charlotte got to study in Massachusetts to be a teacher.

Charlotte Went to the Cambridge English High School. Her mother, Caroline sent her to the public school alongside her brother. During her graduation day, she was chosen to give a speech to the parents and the school's fraternity. After some time, she got a sponsorship from, Alice Freeman Palmer to attend Salem State Normal School. Alice Freeman Palmer was a member of the educations board in Massachusetts. However, her mother was hesitant of her idea of going to school; Salem State Normal School. However, she never gave up her dream.

Charlotte took one year in college to study. Therefore, after, she was given the opportunity to serve as a teacher at Bethany Institute. The institute was an education center for the black children during that period. Also, the institute was in, Sedalia, North Carolina. Upon her arrival at her new job, in 1901, Charlotte found out that the school was lacking a lot of resources.  Moreover, the American Association was running the school at the time.

Furthermore, the American Association decided to close the school because it lacked many resources. Therefore, Charlotte decided to open up her institute. So, she raised money towards her project with a lot of discipline. Charlotte was able to raise enough money to buy a 200-acre piece of land for her new institute. Later, Charlotte was able to build two new buildings to start her campus.

Charlotte took the opportunity to name the institute after her mentor Alice Freeman Palmer: Palmer Memorial Institute. The school was both days, and boarding school and many children took up attendance. Some say that the institute was more of a haven to many black children at the time. Upon the completion of the school, Charlotte went ahead to establish the board of trustees of the school. The board members of the Palmer Institute were all blacks. At the time, the school was the only one that was offering pre-college programs to black kids.

The school became a success thereby attracting so many children from around America. Thus, by 1920s, the school was a boarding school for many children around the country too. Most of the children that attended the institute went on to be great people in life. Some of them also followed the footsteps of the founder, v to become educators. Also, Charlotte went around the country giving lectures on the importance of education of all children alike.

During this period, Charlotte got to receive some many honorary degrees. Moreover, this was due to her substantial efforts. After all these, she developed her philosophies that she then went ahead to publish: The Correct Thing To Do—To Say—To Wear. Furthermore, Charlotte made it her mission to go nationally to improve the chance of the African-American child in education sectors.

Some of the groups she participated in, were Negro Business League and Commission for Interracial Cooperation. In history, she is the first lady of the African-American descent to be named as a member of the YWCA. Also, Charlotte got to be an honorary member of the Alpha Kappa Alpha sorority.

Charlotte Hawkins Brown served at the Palmer Memorial Institute for over 50 years till she retired in 1952. However, during her younger years, she met and was wed to Ed Brown for four years. Their union did not bear any children. However, she took the role of raising so many of her relative's children

The death of Charlotte Hawkins Brown came in the year 1961 on the 11th of January, in Greensboro North Carolina. It is a coincidence that she was born and died on the 11th day of the month. Her memories got to be honored by the Palmer Memorial Institute that is currently a museum.

The buildings of the Palmer Memorial Institute went through restoration. Now they are a museum by the name Charlotte Hawkins Brown Museum. The naming aimed to merge the big dreams of the two amazing ladies into one. Also, it had the aim to present the theme of the African American women on matters of education, history and social aspects of life. Moreover, the general dream was to emphasize the efforts of the North Carolina women toward education. Charlotte’s papers are on display at the Radcliffe Institute for Advanced Study at Harvard University.