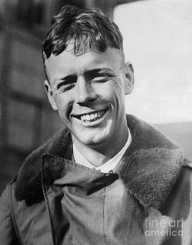 Charles Lindbergh was an American aviation pioneer and writer who is best known for being the first person to complete a solo trans-Atlantic flight.

His parents separated when Lindbergh was seven years old, and he attended a number of schools. It was a school in Little Falls, Minnesota that he eventually graduated from. He attended the University of Wisconsin-Madison, where he studied engineering but dropped out in his second year.

In 1922, Charles Lindbergh signed up for flight training in Lincoln Nebraska. To fund his training Lindbergh would attend barnstorming or stunt shows across America. The following year Lindbergh bought his first plane, a Curtiss JN-4 biplane. Using the plane he took up fulltime work at stunt plane shows under the name ‘Daredevil Lindbergh’. In October Lindbergh sold his plane and returned to the stunt shows performing as a wing walker as well as a pilot. 1924 saw Lindbergh begin military training with the United States Air Service. During his training Lindbergh was involved in a mid-air collision and was forced to bail out of his plane. Despite this he graduated top of his class and was commissioned a 2nd Lieutenant in Air Service Reserve.

Lindbergh continued his stunt career as well as working as an instructor and training with the military. In 1925 Lindbergh began work as an airmail pilot. Operating out of Missouri, Lindbergh flew mail between St. Louis and Chicago. In 1927, he resigned to oversee the design of his most famous aircraft, the Spirit of St. Louis.  The plane was being designed in San Diego and Lindbergh had to secure a fifteen thousand dollar loan as well as put up a thousand dollars of his own money to pay for the machine, his former air mail bosses also contributed two thousand dollars.

Only the Ryan Aircraft Company in San Diego was willing to allow an unheard of pilot buy one of their planes. The reason for this was that Lindbergh planned to fly across the Atlantic and no other manufacturer was willing to risk their models being involved in a high publicity crash. In 1919 Alcock and Brown had completed the first trans-Atlantic flight from Newfoundland to Ireland. After this a French man Raymond Orteig offered a prize of twenty five thousand dollars for anyone who completed a transatlantic flight solo from New York to Paris or Paris to New York. This was nearly twice the distance of Alcock and Browns’ flight. By the time of Lindbergh’s attempt six men had already died attempting the feat.

In the Spirit of St. Louis, Charles Lindbergh departed San Diego on 10 May 1927 and stopped in St. Louis before reaching New York. Lindbergh began his trans-Atlantic assault from Roosevelt Field New York on 20 May 1927. His plane was a single engine Ryan NYP high wing monoplane. Onboard Lindbergh carried 1,704 litres of fuel, and he endured freezing temperatures during his 33 ½ hours flight. Around 150,000 people were present to witness his landing in Le Bourget Airport.

Lindbergh and the Spirit of St. Louis had to be escorted to safety by the French military as overeager souvenir hunters swarmed the airport. His achievement immediately shot Lindbergh to fame. He was inundated with offers of interviews and jobs. Lindbergh was honoured in both France and the U.S; on his return to America, he received military escorts and a ticker tape parade in New York. On 16 June he won his cheque for twenty five thousand dollars from Orteig.

Charles Lindbergh's autobiography ‘We’ was released within the year and sold 650,000 copies which netted Lindbergh a quarter of a million dollars. To promote the book Lindbergh travelled to 48 states, and it is estimated 30 million people saw him during this tour. He then embarked on a Latin American tour before returning to Washington to retire the Spirit of St. Louis. Over the course of a year and two days, the plane had logged 489 hours and twenty eight minutes of flight time.

Lindbergh’s success saw a boom in aviation as air mail routes increased and investment flooded into aviation. Lindbergh himself was an avid promoter of airmail.

In 1934 Richard Hauptmann was arrested and a year later found guilty of kidnapping, extortion, and murder. He was executed in 1936. Fearing for his family during the media circus surrounding the trial Lindbergh and his family fled to Europe. Lindbergh had a number of affairs, and he fathered seven children with three different German women. The children did not learn that he was their father until after his death.

Charles Lindbergh was showered with awards for his trans-Atlantic flight. He received the Legion of Honour from France; Belgium made him a Knight of the Order of Leopold, the U.K awarded him the Air Force Cross and America awarded him the Presidential Medal of Honour and Congressional Gold Medal. He won a Pulitzer Prize in 1954 for his writing.

Charles Lindbergh received criticism in the 1930s for his isolationist, racist and pro-Nazi views. Lindbergh campaigned actively against American involvement in World War 2 and was seen by many as a Nazi apologist. Lindbergh was a firm believer in eugenics and the purity of the white race, which were considered acceptable views before the Second World War.

He also despised Communism and decried America’s alliance with the Soviet Union against the Nazis. Lindbergh also shared a number of anti-Semitic views in his diaries and speeches. Despite all his opposition, Lindbergh did fly fifty combat missions as a civilian during the Second World War, although he was active in the Pacific theatre rather than in Europe.