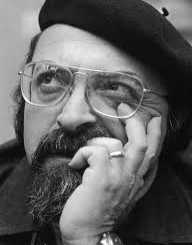 Chaim Potok was an American rabbi and writer.

Herman Harold Potok was born on February 17, 1929, in the Bronx, New York. In Hebrew, his name was Chaim Tzvi. His father, Benjamin, was a watchmaker and jeweler. His mother’s name was Mollie. His parents were Jews that emigrated from Poland. He had one brother and two sisters, all younger than him.

Potok had an Orthodox Jewish education. He studied at the Marsha Stern Talmudical Academy, a prestigious prep school for boys. He then enrolled at Yeshiva University. He graduated in 1950 with a bachelor’s degree in English literature. He then spent four years studying at the Jewish Theological Seminary of America. After completing his studies, he was ordained as a rabbi. Soon after, he started working on a master's degree in Hebrew literature. In 1965, he earned a doctorate in philosophy from the University of Pennsylvania.

From 1955 to 1957, Potok served as a chaplain with the U. S. Army in South Korea. He then spent some time teaching at the University of Judaism in Los Angeles. He also became the director of Camp Ramah, a Conservative Jewish summer camp. He later became a scholar at Temple Har Zion in Philadelphia. In 1964, he returned to New York City and became the managing editor of the magazine Conservative Judaism. He also became a part of the Teaching Institute at the Jewish Theological Seminary. He then returned to Philadelphia and became editor-in-chief of the Jewish Publication Society.

In 1967, Potok published his first novel, called The Chosen. It depicted the friendship of two boys from different Jewish communities. The book achieved great success, selling millions of copies. It was nominated for a National Book Award and it won the Edward Lewis Wallant Award. In 1981, it was adapted into a film that premiered at the World Film Festival in Montreal. It was also adapted into an Off-Broadway musical and into a play staged in Philadelphia.

In 1969, Potok published The Promise, a sequel of The Chosen. In 1972, he wrote the book My Name is Asher Lev. The novel depicted the struggle of a boy with his parents and his desire to create art. Years later, he published its sequel, The Gift of Asher Lev. In 1978, he published a historical account, called Wanderings: Chaim Potok’s History of the Jews. In 1981, he published The Book of Lights, a book inspired by his experience in the Korean War. He wrote several plays, such as Out of the Depths and Sins of the Father. He published young adult novels, such as The Sky of Now and The Tree of Here. In 1993, he started teaching Postmodernism at the University of Pennsylvania. In 2001, he published his last work, titled Old Men at Midnight.

Potok suffered from brain cancer. He passed away on July 23, 2002, in his home in Merion, Pennsylvania. He was 73 years old. He was buried at the Shalom Memorial Park in Montgomery County, Pennsylvania.