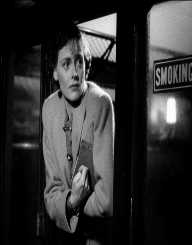 Celia Johnson was born to Robert and Ethel (née Griffiths) Johnson on December 18, 1908, in Richmond, London, England. Celia Johnson was the second of her parents. At age eight in 1916, Celia Johnson made her first public performance playing a role in King Cophetua and the Beggar Maid, aimed at raising funds for the World War I returnee soldiers. From 1919 to 1926, Celia Johnson attended the St Paul’s Girls School, where she played in the school orchestra under, Gustav Holst. After graduating, she enrolled at the Royal Academy of Dramatic Art in 1926 and left studied under Pierre Fresnay at the Comedie Francaise in Paris for a term. On why she choose acting, Johnson said "I thought I'd rather like it. It was the only thing I was good at, and I thought it might be rather wicked.”

Celia Johnson made her professional stage debut in 1928, playing the role of Sarah in George Bernard Shaw’s Major Barbara at the Theatre Royal, Huddersfield. She followed it with the part of Currita in A Hundred Years Old at the Lyric Theatre in Hammersmith, London. In 1931, Celia Johnson traveled to the United States to play the role of Ophelia in a New York production of Hamlet. Upon her return to London, Celia Johnson played several minor roles until she had a role in The Wild and the Role, which ran for two years, 1933 to 1935. Celia Johnson became popular with each production gained recognition with her role as Elizabeth Bennet in Pride and Prejudice and as Mrs de Winter in Rebecca in 1940. However, the Luftwaffe bomb that destroyed the theatre in September 1940 halted the production of the latter.

In 1942, she played a role in In Which We Serve and later in This Happy Breed in 1944 all written by Noel Coward and directed by David Lean. Celia Johnson's most famous and award-winning film, Brief Encounter was released in 1945. Due to her commitment to her family, she was sceptical in accepting the role but wrote to her husband stating that "There is no getting away from the fact that it is a very good part and one which I should love to play. I have found myself already planning how I should play bits and how I should say lines..." The film became very successful for which she won the New York Film Critics Circle Award for Best Actress and had nominations for the Academy Award for Best Actress. She then went on hiatus in the care of her family but returned to open The Grass is Greener in 1952. Her later roles include The Flowering Cherry, 1957, The Master Builder, 1964 and Hay Fever in 1964.

Celia Johnson received six nominations for BAFTA awards but won twice including BAFTA Award for Best Actress in a Supporting Role for The Prime of Miss Jean Brodie, 1969 and BAFTA TV Award for Best Actress for Mrs. Palfrey at the Claremont in 1973. She was honored a Commander of the Order of the British Empire in 1958 "for services to the theatre" and later raised to Dame Commander (DBE) in 1981.

Celia Johnson was married to Peter Fleming from 1936 until his death of heart attack in 1971. The couple had three children, Nicholas Peter Val Fleming, Kate Fleming and Lucy Fleming. She died in 1982, shortly after suffering a stroke while playing bridge with her friends in her Nettlebed, Oxfordshire, home.