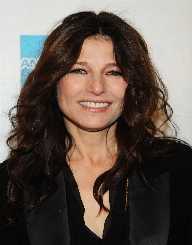 Catherine Keener is an American actress with an Irish and Lebanese descent. She received nominations due to her acting skills. Keener is well-known for acting in the 1999 film Being John Malkovich with John Cusack and Cameron Diaz. The film was directed by Jonze Spike Jonze and earned her an Oscar nomination for Best Supporting Actress category.

She was married actor Dermont Mulroney back in 1990 but divorced after 17 years due to irreconcilable differences.  Their divorce was finalized on December 19, 2007.

In the span of their marriage, they have a son named Clyde who was born in 1999 and later on became a singer.

Born on March 23, 1959, in Miami, Florida, Keener was the fifth child of Jim and Evelyn Keener. She also has a sister who's not only an actress but also a real estate agent based in Los Angeles named Elizabeth Keener.

It was also in Wheaton College where Keener made her debut theater production. During her junior year, she was cast in the play Uncommon Women and Others wherein she portrayed Wendy Wasserstein.

She graduated with a degree in English and History at Wheaton in 1983.

When Keener graduated from College, she left Massachusetts and moved to New York to work under casting agent Gail Eisenstadt. She also supported and pushed Keener to pursue acting. Relentless, she made arrangement for Keener to appear in the film About Last Night in 1986. Despite playing a small role in the film, it was enough to attract the attention of directors who went on to Keener on their works.

She was hired in a series of small acting roles on television series such as the 1986 CBS sitcom, The Alan King Show and ABC network's O'Hara which ran for a year from 1987 to 1988.

Moving on from TV series, she had her share of involvement in feature films. Keener was part of the cast of the 1989 film Backtrack, followed by the 1991 film Switch. She had her first starring role alongside a pre-famous Brad Pitt in the film Johnny Suede which was directed by Tom DiCillo.

She also managed to work with established actors in the industry namely George Clooney in the 1998 film Out of Sight and the 1999 action film 8mm with Nicholas Cage. She also worked with Sharon Stone in the film version of Simpatico in 1999.

Following these films, she had minor roles but ultimately starred opposite Steve Carell in the 2005 comedy film The 40-Year Old Virgin which was a comedic success. Keener also worked on the critically acclaimed film Into The Wild with Sean Penn in 2007.

Her most recent acting gig was of Missy Armitage in the 2017 horror film Get Out which received positive praise from the media and the general public.