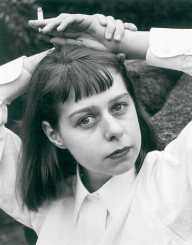 Carson McCullers was an American novelist, playwright, and poet.

Lula Carson Smith was born in the city of Columbus, Georgia, on February 19, 1917. Her father, Lamar, was a jeweler. Her mother’s name was Marguerite. She graduated from Columbus High School, and she moved to New York City.

Carson McCullers planned to attend the Juilliard School of Music. She then changed her mind, and she decided to focus on writing. She worked different jobs while taking writing classes at Columbia University and New York University. At the age of 20, she took the last name McCullers from her husband.

Carson McCullers first published work was called “Wunderkind.” It was a short autobiographical piece. It was published in Story magazine. In 1940, she released her first novel. Called The Heart Is a Lonely Hunter. It told the story of a deaf and mute man who lived in a small town in Georgia. The book received praises from critics and significant commercial success. It was adapted into a film in 1968.

The next year, McCullers published Reflections in a Golden Eye. The story was about a Major in the army and his wife. In 1967, it was adapted into a film.

The roles were played by the legendary movie stars Marlon Brando and Elizabeth Taylor. In 1946, she published the novel The Member of the Wedding. She adapted it into a play herself. It made its Broadway debut in 1950, and it won an award for Best Play by the Drama Critics’ Circle. The next year, she published

The Ballad of the Sad Café. It consisted of a novella and six short stories. It was adapted into a Broadway play in 1964, and it won six Tony Awards.

In 1957, McCullers created a play called The Square Root of Wonderful. It played on Broadway, but it was not very successful. In 1961, she released her final novel. It was called Clock Without Hands.

It received somewhat good reviews, but it was not successful overall. In 1964, she released Sweet as a Pickle, Clean Like a Pig, a collection of children’s songs.

In 1972, after Carson McCullers’ death, her sister Rita edited and published a collection of her writings. It was called The Mortgaged Heart. In 1999, her unfinished autobiography was published. It was called Illumination and Night Glare.

In 1937, Carson McCullers married the former soldier and aspiring writer Reeves McCullers. They had a difficult marriage. They were both heavy drinkers, they often fought, and they had affairs with other people.

They got a divorce in 1941. After that, Carson McCullers dated the composer David Diamond. In 1945, she remarried her former husband. He committed suicide in 1953. She was also romantically interested in women, even though she never actually dated them. She was friends with many important literary figures such as Truman Capote, Tennessee Williams, and many others.

Carson McCullers had health problems her entire life. She suffered from rheumatic fever from a young age. She was also an alcoholic. By the age of 31, her left side was paralyzed because of several strokes. She passed away after a brain bleeding on September 29, 1967. She was buried at the Oak Hill Cemetery.