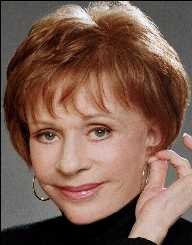 Carol Burnett is rightly known as the Queen of comedy since she stepped her fame over a decade. She has hosted television shows such as ‘The Carol Burnett Show.' She is a legendary leader when it comes to TV shows and entertainment. Her 60s and 70s episodes were a mix of dance routines, songs and different cosplays that made her to become audience favorite. She was the first film actor to be given a chance to control every move of the show’s reaction. Since the show ended in 1978, Burnett majored in producing, acting as well as playwriting. She is strongly adored by her workmates as well as the audience.

On April 26, 1933, Carol Burnett was born in San Antonio, Texas, United States. At the age of three, her family moved to California. Her father, Joseph Burnett suffered from chronic tuberculosis and alcoholism. Her mother Ina Louise once dreamt of becoming a writer, but her addiction to alcoholism didn’t allow.

At the age of 8, Carol’s parents divorced and she was forced to live with her grandmother. She was an intelligent old woman who gave the young girl inspirational thoughts. She used to take her to the movie for entire eight times a week. At that point, Burnett thought she was in a fantasy kind of life.

When Carol started her college career, she landed an ushering job at Warner Brothers who happened to own a movie theater. In a short period, Carol was fired for not setting a show. In 1975 she managed to receive a Hollywood Walk of Fame and asked for it to be positioned in front of the Warner Brothers Theater.

In 1951, Burnett joined UCLA and managed to pursue a degree in English writing. Luckily, Burnet’s performance caught one of the attendee’s attentions, and she was given some money to travel to New York. The plan was for her to showcase her talent in several show businesses.

In 1954, Carol graduated and moved to New York. This is where she married her very close friend and a classmate called Don Saroyan. After a few tests in nightclubs, local shows, Burnett landed a long-term projects show. In 1959, she took the lead as the role of Princess Winnifred in the Once upon a Mattress. George Abbot directed the film.

In 1998, Carrie, her daughter asked her to collaborate on a script that was to be played in One More Time. Carol paused for some time since her daughter was under medical care for cancer. Unfortunately, Carrie died due to lung cancer on January 20; 2002. Both had planned to rehearse for the premier Halloween projects. She gathered herself up and continued to write the Hollywood Arms. She later scheduled for a United States tour that was a program planned to answer several questions asked by her fans.

The time that the audience took and paid to hear and see her talk was a memorable experience for Carol Burnett. In November 2001, at the age of 69 Burnett married her third husband, Brian Miller. Even then, Burnett gave up sharing her ideas on any other show. Since then she has been given more than a hundred offers to host her program without success.

Carol Burnett continued to live her life in public view till one of the gossip magazines tasted her ‘sweet water.' Early in 1970 one of the free magazines printed out that Carol was found drunk and behaving disorderly in a famous restaurant. Once she came across the title, she was personally wounded knowing that alcohol destroyed her family. She later sued the paper, and afterward, she was awarded with a ransom amount of money which she later gave to charity.