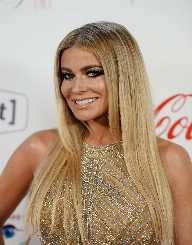 Carmen Electra is a distinguished glamor girl who rose to stardom when posing bold covers in Playboy magazine. You can never remind her that she is a one in all; she perfectly knows that her nice figure is loved and envied by all. Not to mention her clear like blue eyes rhyme perfectly with her skin tone. Her parents are also in the world of entertainment, so it’s not by chance that Carmen followed their footsteps. Besides being an actress, Carmen is also a fashion icon as well as a great dancer by profession. Her personality rose after appearing in a Playboy magazine and films like ‘Disaster’ and ‘Date’ movie.

On April 20, 1972, Tara Leigh Patrick was born in Sharonville, Ohio, the United States to Patricia and Harry Patrick. She is the youngest child of five siblings. In 1998 Carmen’s mother died, and her father did everything to support his family. After few years, Harry Patrick got married for the second time. Carmen attended Weigel Elementary School where she learned how to dance by her tutor; Gloria J. Simpson. Afterward, she enrolled for Creative and Performing Arts while still at Cincinnati Public School District. In 1990 Electra started her dancing career where she landed a job at Kings Island. She also collaborated with Paisley Park Records and signed a contract. In the process, Electra met with her mentor and music legend, Prince. Both moved to California in 1991.This made her emerge as a start in California hence the adoption of stage name Carmen Electra appeared.

Electra life changed when she met with Prince in 1991.Prince selected for her an unforgettable name that acted like a charm in her life. It wasn’t until she signed a deal with Prince Company and started her road to fame. Although it took some time before her hitting the top ten charts, Electra soon turned into a world romantic icon in ‘Baywatch’ film. She also appeared in movies like ‘Scary Movie’ and 'Starsky and Hutch’ in collaboration with Owen Wilson. She later released a fitness video titled ‘Aerobic Striptease’ in 2003.

In due course, Carmen Electra appeared in more than ten films and television productions. In 2004 she released a horror movie titled ‘Monster Island,' a sports comedy ‘Mr.3000’ and action movie ‘Ma Havoc; Curse of The Dragon.' Other recognized projects include ‘Getting Played’ in 2005 and ‘Cheaper by the Dozen2’.Still sticking with a different genre of mimic films, Electra got a chance to meet with Sean Maguire’s King who played ‘Meet the Spartans’. Her most recent project includes 'Disaster Movie' in 2008.She also launched her new song album titled ‘I liked it loud in 2012.

Carmen is currently supporting over fifteen foundation and charities. Some include; AIDS LIFE, Habitat for Humanity, Elevate Hope Foundation, and Race to Erase MS among others. She also organized a fundraiser for Head to Hollywood which provides ample support to brain tumor survivors. Carmen has also managed to produce various equipment and video. She also appeared as a character in ‘Def Jam; Fight for New York’ video game. Over the course of her fame, Electra has received several awards such as the MTV Movie Award for Best Kiss.

Carmen Electra or her real birth name Tara Leigh had an open relationship status with several celebrities. She has publicly mentioned about her affairs. In her early years, she dated Dennis Rodman, and the couple got married in 1998. But the marriage lasted for one year only. She started to have a romantic connection with Dave Navarro in 2003 which led to divorce in 2007. From 2008 to 2012 Carmen dated Rob Patterson. Currently, she is single and is now living with her mother. She loves her family to the core. Besides her career, Carmen loves to dance, play basketball, to watch movies as well as listening to music. Moreover, Electra likes to spend more time with friends and family and shopping as well. Tara has managed to contribute to Parkinson’s disease hence creating motivation for other supporters to chip in.