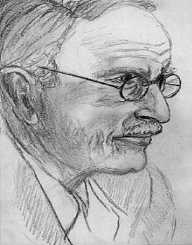 Carl Gustav Jung was born on July 26, 1875, in Keswill, Thurgau canton in Switzerland. He was the first surviving child of his parents Emilie Preiswerk and Paul Achilles Jung. His father was a rural pastor in the Swiss Reformed Church. Paul was later appointed to work at the Laufen parish. His mother was of an eccentric nature and was suffering from depression.

The relationship between Jung’s parents was filled with a lot of tension. As a child, Jung was closer to his father. His mother left the family for several months, and Carl was taken care of by her sister in Basel. The events of his childhood influenced Jung, and he developed a sense of innate unreliability towards women.

Carl Jung attended the Humanistisches Gymnasium in Basel. During his time in school, he was often harassed by older students. On one occasion, Jung was pushed to the ground and lost consciousness, and from then on he began to faint every time he did not want to attend school. However, the realization of his family’s poor status made Jung overcome his neurosis, and he began studying intensively.

He became interested in psychiatry, and in 1895, he entered medical school at the University of Basel. When his father died in 1896, Jung’s schooling was paid for by his relatives.

Carl Jung's first job came in 1900 when he began working at the Burgholzli psychiatric hospital in Zurich. He was at that time working under Eugen Bleuler, who was in close contact with neurologist Sigmund Freud. In 1903, Jung published his dissertation On the Psychology and Pathology of So-Called Occult Phenomena. His second work, Studies in Word Association was published in 1906.

A copy of the book was sent to Freud, and the two developed a close friendship. They began corresponding and cooperating on their work. However, in 1912, Jung published the Psychology of the Unconscious, which created a theoretical divergence between them and ended their friendship in 1913.

When World War I broke out, Carl Jung was drafted in the army to work as a doctor. He became the commandant of the internment camp for British soldiers. His main work was to improve the conditions for the soldiers and encouraging them to attend university.

After the publication of Psychology of the Unconscious, Carl Jung broke his relationship with Freud, since Freud refused to consider Jung’s ideas. Many of his friends and colleagues dropped away. In 1922, he revised and republished the book with a title Symbols of Transformation. Jung’s ideas were widely accepted in England.

During 1913 and 1913 he often traveled to London to speak at the meetings of the Psycho-Medical Society. His works were translated and published manly through the efforts of Constance Long.

In 1913, Carl Jung began to experience visions and heard voices, and began to worry that he might be suffering from a psychosis or schizophrenia. However, he began to write down his experiences in journals, and continued to write them for the next sixteen years. The collection of his writings was named the Red Book. After Jung’s death, the book was kept by his family members who refused to publish it. Until 2008, it was seen by less than 20 people, however, his grandson Ulrich Hoerni decided to publish it.

In the late 1910s, Carl Jung began to publish several journal articles. In 1921, he published one of his most famous and influential books Psychological Types. In 1920, Jung delivered a seminar in Cornwall, which was followed by two more in 1923 and 1925. During the winter of 1924, Jung traveled to United States. A decade later, he went to United States once again, giving lectures in New York and New England. In 1937, Jung published a collection of his lectures at Yale University, called Psychology and Religion.

In 1925, Carl Jung traveled to East Africa on his Bugishy Psychological Expedition. He traveled to India in 1937, and since then, Hindu philosophy became an important part of his understanding of symbolism and the unconscious life. Jung continued to extensively publish his works as journal articles and books. One of his last works was Flying Saucers: A Modern Myth of Things in the Skies in 1959. The book analyzed the meaning and psychological significance of the reported UFOs.

In 1903, Carl Jung married to Emma Rauschenbach. She was the daughter of a wealthy industrialist in Switzerland, who owned the International Watch Company. After her father’s death, Emma inherited a part of the business, which ensured the family of financial security. She began studying intensively and later became a noted psychoanalyst herself. The Jungs had five children. Emma Jung died in 1955.

During the course of his marriage, Jung had several extramarital relationships. He allegedly had an affair with Sabina Spielrein and Toni Wolff. Jung died on June 6, 1961.