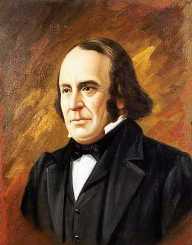 Biologist and geologist Louis Agassiz was born on the 28 May 1807 in Motier, Switzerland to Jean Louis Rodolphe and Rose Agassiz.

After completing his schooling in Lausanne, Agassiz attended university in Germany and Switzerland where he trained to be a physician. He obtained a doctorate in philosophy in 1929 from Erlangen and an MD from Munich in 1830. In 1831 Agassiz had the opportunity to study with naturalist Cuvier in Paris who taught him comparative anatomy.

Cuvier, who had founded the field of paleontology, found Agassiz’s research impressive. He subsequently left his papers on fossil fish for Agassiz to complete. The published work was highly acclaimed for its accuracy in describing fishes of the ancient fossiliferous bed of red sandstone.

After working with Cuvier Agassiz believed that major groups of animals do not represent ancestral branches of an evolutionary tree. This later led him into conflict with his friend Charles Darwin and his theory of evolution.

Agassiz was a professor at the Lyceum of Neuchatel in Switzerland for thirteen years where he worked on paleontology, glaciology, and systematics. He became interested in glaciers and studied them with input from Ignatz Venetz and Jean de Charpentier who encouraged him to study glaciers in Switzerland. Agassiz began to become a follower of the theory of an Ice Age and published his ideas in two books: Étude sur Les glaciers (1840) and Système glaciaire (1847).

Agassiz moved to the United States in 1848 and took up a position of professor at Harvard University. In 1860 he set up the Museum of Comparative Zoology at the university. Then in 1863, he was one of the founders of the National Academy of Sciences.

As a teacher, Agassiz became famous in both North America and Europe. His Harvard class in natural history produced many talented and inspiring teachers in the field.

Because of his belief in polygenism viz. That races were created separately and are unequal, Agassiz has been accused of scientific racism.

Agassiz was married twice. He was married to his first wife Cecilie Braun when he met Elizabeth Cary in 1846. After Braun died in 1848, he married Cary in 1850. Agassiz had three children: Pauline, Ida, and Alexander.