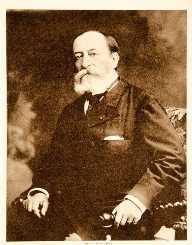 Camille Saint-Saëns was a French composer and is best known for his Danse Macabre and The Carnival of the Animals, compositions.

Camille Saint-Saëns was born on 9 October 1835 in Paris, France. His parents were Victor Saint-Saens and Francoise-Clemence née Collin. His father worked at the French ministry of the interior and died of consumption just two months after his son’s birth. For fear of the young Saint-Saens catching the disease, he was sent to the countryside to be raised by a wet nurse. Saint-Saens the first two years of his life in Corbeil, some eighteen miles outside of Paris. He then returned to live with his mother and aunt, Charlotte, who was a widow. He began playing the piano before he had turned three. From the age of five, he was giving small performances to associates of the family. He began training under Camille-Marie Stamaty at age seven. He made a public performance when he was ten years old, performing pieces by Mozart and Beethoven.

He quickly became known in Paris as a child prodigy. It was the work of Bach that seemed to most influence the young Saint-Saens. He also had excelled at other subjects such as languages and maths; he also maintained a keen interest in philosophy and astronomy throughout his life. When he was thirteen, he gained admittance to France’s most prestigious music academy, Paris Conservatoire. The academy was very conservative in its style, and great emphasis was placed on the organ, it was seen as offering the greatest chance of employment.

Camille Saint-Saëns excelled on the instrument and was named the academy’s best organist in 1851. He began composing his music while at the academy and in 1850 he produced, Les Djinns and a symphony in A major. His 1852 piece, Ode á Sainte-Cécile, won first prize in a Paris music competition. Saint-Saens left the Paris Conservatoire in 1853.

Camille Saint-Saëns first employment was as the organist for the Saint-Merri church in Paris. It served a large parish of over twenty five thousand members and Saint-Saens’ income was dependent on the weddings and funerals of these parishioners. In 1853, Saint-Saens wrote his Symphony in E and the piece proved popular with the French public who were buoyed by the restoration of the Bonaparte dynasty and the French Empire. His composition also brought him to the attention of well-known composers such as Liszt and Rossini. His growing popularity allowed him to land the position as organist at the official church of the French Empire, La Madeline. It was at La Madeline that he was first heard by Friedrich Liszt, who held Saint-Saens in the highest esteem thereafter.

Camille Saint-Saëns was also a great admirer of Liszt’s work as well as that of German composer, Wagner. However, Saint-Saens rejected utterly the nationalism of Wagner’s compositions. In 1861, Saint-Saens accepted a position as teacher of classical religious music for organ players. While teaching he caused a minor scandal by teaching his students the works of Liszt and Wagner. It was while he was working as a teacher that he began work on, The Carnival of the Animals. The piece was originally intended to be a series of one-act farce pieces but ultimately evolved into one of his best-known works. Saint-Saens left his teaching position in 1865 and began composing and performing more regularly. In 1867, he won a prize at the Grand Fete Internationale for his cantata, Les Noches de Prométhée. This was in contrast to Saint-Saens twice being defeated in the Prix de Rome, were judges declared him proficient rather than genius.

He performed his first orchestral piece in 1868 and toured with his Second Piano Concerto. The outbreak of the Franco-Prussian War in 1870 saw Saint-Saens called into the National Guard and following the Paris Commune he was forced to flee to England for a short period in exile. Returning to France he found the music landscape changed, anti-German sentiment meant that German music, which had been dominant, was much diminished in popularity.

This gave a huge boost to Camille Saint-Saëns and his calls for a society of French music, which he had mooted before the outbreak of war. His SociétéNationale de Musique was founded in February 1871. 1872, Saint-Saens had his first staging of an opera as the Opera-Comique performed his, The Yellow Princess. Opera was becoming the dominant force in the French music word, but Saint-Saens did have a feature-length opera staged until 1877, The Silver Bell. The same year Saint-Saens was left a large sum of money by Albert Libon. This money allowed him to give up his position as an organist and focus on composing his own music. This led to the composition of his opera, Samson and Delilah, which was warmly received in many cities in France and Germany.

Camille Saint-Saëns frequently traveled to England and Germany to perform and would winter in North Africa. He continued to pursue success in the field of opera, although many connoisseurs felt that an organist would be incapable of producing a great opera. In 1883, he was commissioned by the Paris Opera to compose, Henry VIII. The production was very successful and received a number of recommissions. In 1886, he resigned his position within the SociétéNationale de Musique as once again Wagnerian style became the dominant force. Having previously admired Wagner’s work and having performed it before it became popular outside of Germany Saint-Sanes now felt it was eroding French musical tradition.

Camille Saint-Saëns felt this was a betrayal of the society’s original purpose and resigned his vice-president position. The same year he premiered his Third Symphony in London. The work proved hugely successful and upon his return to France received a delirious reception. The success though was halted with the destruction of the theatre in a fire shortly after the symphony premiered. The death of his mother in 1889 led to Saint-Saens falling into depression, he left Paris and lived a largely nomadic live for over a decade. He was always warmly received as a performer in London and Berlin he also performed in Italy and Spain.

In 1893, Camille Saint-Saëns performed with Tchaikovsky in Cambridge, England. 1906 saw Saint-Saens perform in the United States of America. However, Saint-Saens became increasingly out of touch with the direction of music and was seen as a conservative. He intended to retire in 1913, but the outbreak of World War I led to him performing a number of concerts for charity to aid the war effort. He made his last performance in November 1921.

Camille Saint-Saëns married Marie Laure Truffot in 1875. Saint-Saens’ mother, who continued to live with him, did not approve of the marriage. Saint-Saens and Truffot had two sons together, André and Jean-Francois. Both their sons died in 1878, André from a fall and Jean-Francois of pneumonia. The loss of their children destroyed their relationship and while on holiday Saint-Saens walked out on his wife, although the two never divorced. Saint-Saens instead became close to the family of his friend Gabriel Fauré, acting as a surrogate uncle he found the domestic happiness he had been denied with his own family. Camille Saint-Saëns died of a heart attack in Algiers on 16 December 1921.