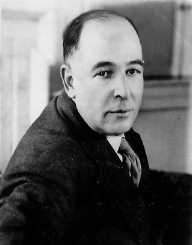 Clive Staples Lewis was born on November 29, 1898, in Belfast, Ireland. He was a prolific British writer and scholar famously known for his work 'Chronicles of Narnia.' He taught English literature at Oxford University from 1925 to 1954 and Cambridge University from 1954 to 1963. His works include ‘The Screwtape Letters,’ ‘The Space Trilogy,’ ‘Mere Christianity,’ ‘Miracles,’ and ‘The Problem of Pain.’

He wrote over thirty books which have also been translated in over 30 languages globally. Millions of copies have since been sold with many of his writings gaining widespread acclaim, especially by many Christian denominations. He died on November 22, 1963, at the age of sixty four.

Clive Staples Lewis was born in Belfast, Ireland to Albert James Lewis and Florence Augusta Lewis. He was born on November 29, 1898. At the age of seven, his family relocated to Little Lea in Strandtown area of East Belfast. He was under a private tutor until he turned nine in 1908 the same year his mother died of cancer. He later went to study at Wynyard School in Watford, Hertfordshire.

Unfortunately, he never completed his studies there due to the closure of the school for lack of enough pupils. He went to Campbell College in the east of Belfast but never completed his studies as well due to respiratory problems. He was sent to study at the preparatory school Cherbourg House in Malvern, Worcestershire. In September 1913, he joined Malvern College before attending Lurgan College.

C. S. Lewis received a scholarship at University College, Oxford in 1913 but after a few months of study, he was drafted into the British Army during the First World War. After he was discharged, he returned to Oxford in 1917 and became a member of the Officers' Training Corps within the institution. Later on, he was enlisted into a Cadet Battalion for training and qualified as a Second Lieutenant in the Third Battalion of the Somerset Light Infantry of the British Army.

After being sent to war in November 1917, he suffered injuries on April 15, 1918, as some of his colleagues died from the British shell which fell short of its target. He sank deep in depression and was always homesick and after being commissioned to serve in Andover, England he was released in December 1918. In 1920, after his return to Oxford received his a First in Honour Moderations in Greek and Latin literature and 1922 received a First in Greats: Philosophy and Ancient History.

In 1923, C. S. Lewis also received a First in English and began serving as a philosophy tutor at University College in 1924. He was appointed a Fellow and instructor in English Literature at Magdalen College the following year and served until 1954 for twenty nine years.

At Magdalen College, he became a member an informal collective of writers and intellectuals group known as ‘The Inklings.' The group was Christian based where Lewis embraced his original faith again after many years. He began writing rich apologist texts in which he expounded on what he believed in using logic and philosophy.

He published his first book titled ‘Dymer’ in 1926 followed by many others including ‘The Pilgrim's Regress’(1933), ‘Perelandra’, ‘That Hideous Strength’, ‘The Abolition of Man’ (1943), ‘The Dark Tower’, ‘The Chronicles of Narnia’, ‘The Great Divorce’, ‘The Screwtape Letters’, ‘Till We Have Faces’, ‘Spirits in Bondage’, ‘The Four Loves’ among others. In 1954, he started serving as chair of Mediaeval and Renaissance Literature at Cambridge University.

C. S. Lewis married an American English teacher Joy Gresham in 1956 and remained married until 1960 when his wife died of cancer. He was devastated and lonely due to the loss of his wife. He lived a troubled life and experienced heartaches which led to him resigning from Cambridge University. He died on November 22, 1963, in Oxford, England at the age of sixty four.