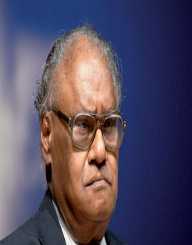 Chintamani Nagesa Ramachandra Rao best known as C.N.R. Rao is a prominent chemist from India. Born on June 30, 1934, his main field of work is in solid-state and structural chemistry.C.N.R. Rao served as the Head of Scientific Advisory Council to the Prime Minister of India in 2005. Aside his research works, C.N.R. Rao is an academician and has taught in IISc, University of Oxford, Purdue University, Indian Institute of Technology Kanpur, University of California, University of Cambridge and Santa Barbara. He was a Professional Fellow at King’s College from 1983 to 1984 and the Jawaharlal Nehru Professor at the University of Cambridge. Roa is the founder and honorary president of Jawaharlal Nehru Centre for Advanced Scientific Research.

C.N.R. Rao has written 45 scientific books and about 1,500 research papers. He has won several awards and honors including the Bharat Ratna by the Indian Government, awarded him by President Pranab Mukherjee in 2014. This makes him the third scientist after C.V Raman and A.PJ Abdul Kalam to receive the award, which is the highest civilian award in India. He has honorary degrees from more than 60 universities.

C.N.R. Rao was born to Hanumantha Nagesa Rao and Nagamma Nagesa on June 30, 1934, in Bangalore. He was the only child of his parents. Growing up, he was home-schooled by his mother who taught him Hindu literature and arithmetic and his father taught him the English language. At age six, C.N.R. Rao entered into middle school, and with the knowledge acquired a home, he sometimes taught his classmates English and mathematics. Rao was a brilliant student that he excelled in his lower secondary examination with first class in 1944 at age ten.C.N.R. Rao continued his education at Patashala high school in Basavangudi, and that was where he grew his interest in chemistry.

He graduated in 1947 and enrolled at the Central College, Bangalore for his Bachelor of Science degree. He then enrolled at Mysore University where he also graduated with a bachelor degree in 1951 at age 17.C.N.R. Rao then enrolled at Banaras Hindu University receiving his master’s in chemistry in 1953. He was offered a scholarship for undertake his Ph.D. in IIT Kharagpur but also had offers from foreign universities like Penn State, Purdue, MIT and Columbia University. He instead chose Purdue University where he completed his Ph.D. in 1958.

After receiving his Ph.D., he picked a lecturing position at IISC in 1959 and performed independent research programs. He later joined the Department of Chemistry of the Indian Institute of Technology Kanpur from 1963 to 1976. In 1964, he was elected as a follow of the Indian Academy of Sciences. In 1976, C.N.R. Rao returned to the IICs to found a solid state and structural chemistry unit. From 1984 to 1994, C.N.R. Rao was appointed a director of the IICs. C.N.R. Rao during his academic career also picked visiting professorship positions at the University of Oxford, Purdue University, University of California, University of Cambridge and Santa Barbara.

He was a Professional Fellow at King’s College from 1983 to 1984 and the Jawaharlal Nehru Professor at the University of Cambridge. He founded the Jawaharlal Nehru Centre for Advanced Scientific Research, in 1989 and is currently the horary president. He is a National Research Professor and Linus Pauling Research Professor. In 2005, he was appointed the Chair of the Scientific Advisory Council to the then Indian Prime Minister.

C.N.R. Rao had previously held the position from 1985 to 1989. C.N.R. Rao is the director of the International Centre for Materials Science (ICMS) and served on the board of the Science Initiative Group.C.N.R. Rao is one of the leading solid-state and material chemists in the world and has an enormous contribution to the development of the field. His work on transition metal oxides has created a basic understanding of novel phenomena and the relationship between materials properties and the structural chemistry of these materials. C.N.R. Rao was one of the pioneers to fuse two-dimensional oxide material like La2CuO4. His work in the field has also enabled an efficient study of compositionally controlled metal-insulator transitions, which has impacted in fields like colossal magnetoresistance and high-temperature superconductivity.

C.N.R. Rao has received several awards and honors for his scientific and academic works. He has honorary degrees from 60 universities. C.N.R. Rao has been awarded the Marlow Medal by the Faraday Society of England, Yedanapalli Medal and Prize, Medal from the Royal Society of Chemistry,Ernesto Illy Trieste Science Prize for materials research and Distinguished Academician Award from IIT Patna among several others.C.N.R. Rao is a member of scientific associations like the American Academy of Arts and Science, National Academy of Sciences, French Academy, African Academy of Sciences and Pontifical Academy among others.

C.N.R. Rao married Indumati Rao in 1960. The couple has been blessed with two children, Sanjay and Suchitra. He is technophobia and has cleared his desk of all computers and also rarely check on his email himself.