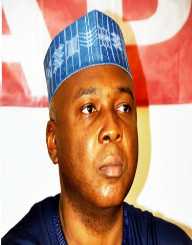 Abubakar Bukola Saraki was born 19th December 1962, to Olusola and Florence Saraki. He was born in Nigeria. His father was a Senator from 1979 to 1983.

Saraki went to King’s College in Lagos from 1973 to 1978, and then Cheltenham College in Cheltenham, London, from 1979 to 1981. He graduated high school in 1981 and then studied medicine at the University of London from 1982 to 1987 when he graduated with his degree.

Abubakar Bukola Saraki took up a position as a medical offer for two years over 1988 and 1989, at Rush Green Hospital, in Essex, England. He then became a Director of Societe General Bank (Nig) Ltd in 1990 and held the position for ten years.

Saraki was appointed as Special Assistant to the President on Budget in 2000. He was appointed by President Olusegun Obasanjo. While in this position, Saraki established the Fiscal Responsibility Bill and was also part of the Economic Policy Coordination Committee.

He decided he would run for Governor of Kwara State in 2003. He ran on the ticket of the People’s Democratic Party (PDP). He won the election and entered office in May 2003. He won his second term in 2007. As Governor, Saraki established many reforms across several portfolios, including agriculture, health, finance, and education, amongst others. He was also elected as Chairman of the Nigeria Governors’ Forum.

When his two terms as Governor came to a close, Abubakar Bukola Saraki decided he would run for the office of Senator, still representing Kwara. Once again he won and succeeded his sister, Gbemisola Saraki-Forowa.

In June 2015, Saraki was elected unopposed, as President of the Senate of Nigeria.

In 2015, Abubakar Bukola Saraki had 13 counts of corruption brought against him by the Code of Conduct Bureau. The charges were about the false declaration of assets, failing to declare certain assets, money laundering, and operating foreign accounts while he was in public office. The Bureau found that Saraki had taken advantage of his position in public office when he was the Governor of Kwara State. He was found to have borrowed billions of dollars from commercial banks and used the money to purchase properties in Lagos, Abuja, and London.

An arrest warrant was issued, and in 2016, a team of 79 solicitors worked to defend Saraki.

2010:   Awarded Commander of the Order of the Niger

2017:   Awarded Outstanding Leadership Award by the Governor of Kwara State

Abubakar Bukola Saraki is married to Toyin, and they have four children together.

Abubakar Bukola Saraki made good headway as Governor and Senator. As Governor of Kwara State, he offered farming opportunities to displaced white farmers from Zimbabwe. The Shonga Farms program was established, and the program is now being copied right across Nigeria. Another significant achievement was electrification projects that enabled the electricity supply to become stable for 18-22 hours per day. This has given 90% of the Kwara population, access to electricity. The national average in Nigeria is 30%.

When he was Senator, Saraki established the Kwara Class of Honor program. The program provides Post-Graduate scholarships for students to continue with their studies at an institution of their choice, anywhere in Nigeria.