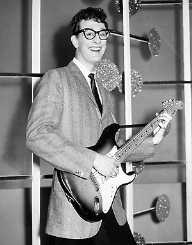 American musician Buddy Holly was born on the 7 September 1936 in Lubbock, Texas. He was born into a musical family, and by his early teens, he was playing the banjo, guitar, and mandolin.

In his teens, Buddy Holly began writing songs and performing with his childhood friend Bob Montgomery. The duo named themselves Buddy & Bob. Holly was drawn towards blues, R&B and country music. The duo played as an opening act for Elvis Presley in Lubbock, Texas in 1955.

By 1955 Buddy & Bob had a bass player, Larry Welborn and a drummer Jerry Allison. They cut some music but would not find a label. Bob Montgomery then left the group as he was more included towards traditional country music. Montgomery and Holly remained friends and still composed songs together. At this time Buddy Holly was moving toward rock and roll with other local musicians. He formed a band called The Crickets, and their first official recording was done in January 1956 for Decca Records in Nashville. Sonny Curtis played the guitar and Don Guess was on bass. The recordings did not garner much attention, and Decca did not sign them up.

Buddy Holly and his band then began recording with Norman Petty, a musician, and producer. It was Petty who encouraged the band to record That’ll Be The Day. Petty subsequently became the band’s manager and sent a demo of That’ll Be The Today to Brunswick Records. It was released under the band’s name, The Crickets.The band set out on tour to promote the single, and by late 1857 the song had was on the US Best Sellers in Stores list and on the charts in the U.K. The band’s next release, Peggy Sue was also a hit and in November 1957 their debut album Chirping Crickets was released. Holly appeared on The Ed Sullivan Show early in 1958 and then toured the UK and Australia.

When touring the U.K. John Lennon and Paul McCartney saw the show and later said that the name The Beatles was a nod towards the Crickets. After the 1958 tour, Holly and the Crickets disbanded.

At the beginning of Buddy Holly was touring the United States in 1959 with his new band. Band members included Waylon Jennings, Tommy Allsup, and Carl Brunch. In Duluth, Minnesota, a young Bob Dylan was at the show.
Holly had done a show in Clear Lake, Iowa on the 2nd February 1959 and chartered a plane to Moorhead, Minnesota for when the plane crashed on takeoff. Holly was killed along with Ritchie Valens, J.P. Richardson and Roger Peterson who was piloting the aircraft.

Buddy Holly was inducted into the Rock & Roll Hall of Fame in 1886.

In 2011, Maria Elena Holly, Holly’s widow, accepted Buddy Holly’s star on the Hollywood Walk of Fame. And Rolling Stone magazine has ranked him number thirteen on the magazine’s list of the 100 Greatest Artists.

Buddy Holly was a pioneer of Rock & Roll. He influenced Hank Marvin & the Shadows, John Lennon, Paul McCartney, Keith Richards, Mick Jagger Bob Dylan and many others. Singer/songwriter Don McLean had a hit in 1971 with American Pie, a song he wrote about the death of Holly in 1959. Many famous artists have covered Holly’s songs and in his publishing catalogue was bought by Paul McCartney, a long-time fan of Holly. Graham Nash named his band The Hollies in his honor, and The Beatles recorded a cover version of Words of Love on their Rubber Soul album.

Buddy Holly & The Crickets were one of the first bands to have number ones hits with songs they had written themselves. Songwriting at the time was not usual for recording artists when they started producing songs like Peggy Sue, and That’ll Be The Day.

The International Buddy Holly Memorial Society was founded in 1975 by the late Bill Griggs. By 1990 the society had members all over the United States in dozens of countries across worldwide. The ballroom where Holly played his final show holds an annual Buddy Holly tribute.

On the 15 August, 1958 Buddy Holly married  Marie Elena Santiago. The couple lived in Holly’s hometown of Lubbock in Texas, moving to New York City late in 1958. Santiago was pregnant with their first child when Buddy Holly was killed in February 1959, and she subsequently miscarried. Although she later remarried, had three children and divorced, she has spent her life protecting Holly’s estate and musical heritage.