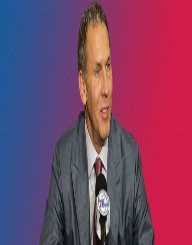 Bryan Colangelo was born on June 1, 1965. His father is Jerry Colangelo.

As a teenager, Bryan Colangelo attended Central High School, in Arizona. After graduating in 1983, he enrolled in Cornell University. While here, he played on the basketball team. He later graduated from this school in 1987 with a bachelor’s degree.

Between the mid-1990’s to the end of the millennium, Bryan Colangelo quickly worked his way up the ranks in the Phoenix Suns. He shortly became the vice-president of the team, and in 1999 he was made the president of the team. At the time, he was the youngest president the team had ever had.

Later in 2006, he began working as a general manager for a new team: the Raptors. While here, Bryan Colangelo continued to manage many great trades for the team. One of the players he drafted for the team was Robert Whaley and Andrea Bargnani. For the rest of this decade, he continued to make great changes, trading players left and right to improve his team.

It was in the latter part of 2016 that Bryan Colangelo started to work as the president of the Philadelphia 76ers. While here, he also had a chance to work with his father, who had previously been a chairman for the team. While working here, he continued to draft players. Some of the players he drafted were Andzejs Pasecniks and Mathias Lessort. As of 2017, he continues to work as the president and general manager for this team.

Most all of Colangelo’s awards are due to his work in the sports field. Some of his most prestigious awards are listed below.

Bryan Colangelo married Barbara Bottini. Together, they have two children: one son, Mattia; and a daughter, Sophia.

Bryan Colangelo may currently work for a Philadelphia based team, but he has also been known to want to move to Canada. He had spent time in Canada while working with the Toronto Raptors. He was in the process of earning his Canadian citizenship at the time he began working for the Philadelphia 76ers. It is now unknown if he will return to Canada and resume earning his (and his family’s) citizenship, or if he will remain in the United States.