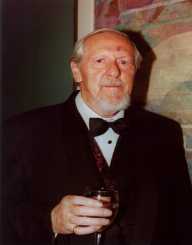 Brian Wilson Aldiss was born on August 18th, 1925 in Dereham, Norfolk, England. His father had a department store which once belonged to Aldiss’s grandfather. Aldiss was born a writer for at the age of three he began writing stories. His mother identified his potential and would help him bind his writings and kept them safely in a shelf.

Brian Aldiss began his early education in a school in Devon known as West Buckland School. He enrolled at the school as a boarder when he was six years old. He later joined Framlingham College.

In 1943 Brian Aldiss actively participated in World War II. He was among the British Army group famously known as Royal Corps of Signals designated in Burma. After the war, he joined Oxford where he served as a bookseller. Here is when he began writing his short stories. The stories were in the form of journals of an assistant bookseller at a fictitious bookshop. The journals got the eye of an editor namely Charles Monteith. This led to the publishing of his first in book The Brightfount Diaries in 1955.

His work constantly appeared in magazines mainly his science fiction work. In 1954 his book story Not for an Age took the third position in a short story competition set by The Observer newspaper. In 1958 he was nominated as the best talented and promising author among new authors.

In 1960 Brian Aldiss was offered the position of the presidency at the British Science Fiction Association. He co-founded Science Fiction Horizons in 1960. This became the first of criticism platform for science fiction journals. Meanwhile; he also worked at Oxford Mail newspaper as the literary editor till 1969.

Brian Aldiss was the pioneer of Minisaga. This is the name he gave to an exceedingly short story. He has since then edited some anthologies of the top performing Minisagas.

Brian Aldiss was first married to Olive Fortescue in 1948. They had 2children, and later his wife died. He then married Margaret Manson in 1965 and stayed married till 1977. Together they had two children.