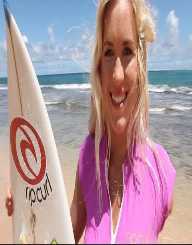 Bethany Hamilton is a professional surfer and a published book author. Her left arm was taken by a tiger shark when she was surfing in Kauai, at the age of thirteen.

Bethany Meilani Hamilton was born on 8 February 1990 in Lihue, Hawaii. Her parents Thomas and Cherilyn Hamilton have two older children: Noah and Timothy before her. Bethany was homeschooled till ten but enrolled at Port Richmond high school after.

At the age of eight, Bethany began her professional surfing career, then coached by Russell Lewis. She got her first sponsorship with Rip Curl a year after, followed by Tim Carroll surfboards.

Bethany Hamilton's first competition was the Rell Sunn Menehune Surfing Championships on Oahu, Hawaii. She was eight years old and came in first. Her big break began in May 2003. She won both in her age group and the open division of Hawaii's Local Motion/Ezekiel Surf Into Summer event. During the same year, Bethany came second in the free women's section of the National Scholastic Surfing Association (NSSA) National Championships held in San Clemente, California.

However, her promising career was eaten by a tiger shark in October 2003, when it took her whole upper left arm off in Tunnels Beach. Bethany survived, but her career as a professional surfer was on the rocks. Bethany was lucky that Holt Blanchard (father of pro-surfer Alana Blanchard) used a surfboard leash to create a tourniquet, saving her life.

After three weeks, Bethany Hamilton was back on a surfboard, as she had to relearn how to surf with one arm. Following her win in NSSA National Competition during 2004, it also earned her recognition and accolades. Among them were ESPY, The MTV Teen Choice Awards, “Wahine O Ke Kai” Award in 2004. In the same year, she published her book: Soul Surfer, which became a bestseller. Her second book Body and Soul was released 2014.

Bethany Hamilton became an inspiration to amputees and athletes alike by being a one-handed pro surfer. Soul Surfer biography was made into a film of the same name. Bethany Hamilton had been on shows such as Ellen Degeneres, 20/20 and many more. She also appeared on Time, People and American girl magazines.

She and husband Adam Dirks were in the 25th season of Amazing Race, finishing third. Bethany also appeared in films such as Dolphin Tale 2 and her feature film, where she did the surfing stunts. Surfs like a girl is another film by Bethany to showcase her as one of the best women surfers in the world. The film is set to release in 2017.

Bethany’s rise to stardom is mainly due to her strength and courage to face her adversaries to reach her goal: professional surfing. She attends events as a motivational speaker when invited.

Bethany Hamilton started her foundation: Friends of Bethany, which reaches out to amputees and youth, offering hope to overcome through Jesus Christ. She also supports other charities like SurfAid, Women's Sports Foundation, and World Vision.

She visited Thailand with World Vision at the age of fifteen (2005), to bring orphans back to the ocean for the first time since 2004 Tsunami, and to promote tourism after the devastation.

In early 2012, Bethany Hamilton was introduced to youth minister Adam Dirks. They were engaged and married a year later. Three years after they met in 2015, Bethany gave birth to a son.

Bethany Hamilton is a professional surfer; she has won many awards since 1998. Her most recent win was 2016 Fiji Woman’s Pro, where she was placed third. Most of her other awards are linked to her as an inspirational figure for many since the shark attack in 2003.