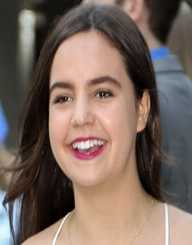 Bailee Madison is a teen actress from Fort Lauderdale, Florida. Bailee was born on October 15, 1999. Although she goes by Madison, she was born Bailee Williams-Holte. Her father is unknown. She has three siblings: Katlin Riley, Shawn Riley, and Connor Riley.

Her mother Patricia Riley raised her. Patricia was an actress. Katlin Riley is also an actress.

Bailee Madison started her career at two weeks old. Patricia started putting her in TV commercials for sea world, Disney, office depot, and Cadillac. With the fact of her mother and sister being an actress, it is little wonder that Bailee would follow in their steps, along with the fact of being in commercials when she was a baby.

Bailee didn’t begin her actual acting career till 2006 when she was seven years old. She was in the movie Lonely Hearts in that year. This was her first motion picture. Then the following year she was in an independent film called Look. She was also in The Bridge to Terabithia in the same year.

Bailee Madison was in the movie Brothers in 2009. For this movie, she was nominated for two separate awards. The awards were the Saturn Award and BFCA Critics’ Choice Award. She played Harper Simmons in Parental Guidance in 2012.

Not only has she done movies in her life but she has also been on several TV shows. She was in the Terminator show the Sarah Connor Chronicles in 2008. She was in RL Stines: The haunting hour in 2010 and 2012. Also in 2010 she was in Law and order special victims unit. Then in 2011, she was in Wizards of Waverley place as Maxine Russo. This same year she was in the movie: just go with it. She stared at it with Adam Sandler.

Bailee Madison played Snow white’s younger sister in the TV show of once upon a time. She was in this for four episodes in 2012 and 2013. After this, she was in the trophy wife as Hillary in 2013.

Bailee Madison is known to have begun a relationship with Emery Kelly in 2013. Then recently in 2016, it was reported that she is dating Alex Lang. She is not married and has no children yet. She is still focused on her career.

Bailee Madison has amassed a net worth of 4 million dollars so far. She averages a salary of $470,000 per year. This is a pretty good salary for a child and teen actress.