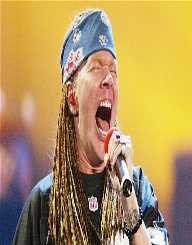 Axl Rose was born as William Bruce Rose Jr. On February 6, 1962, in Lafayette, Indiana, United States of America. He was the oldest child of William Bruce Rose and Sharon Elizabeth. His parents were 20 and 16 years old respectively, and his mother was attending high school at the time of his birth. One of the most unfortunate incidents of Rose’s life was that of his father kidnapping and sexually molesting him when he was only two years old. The incident occurred when his parents were being separated. His mother Sharon later married Stephen Bailey after the disappearance of his father from Lafayette and changed her son’s name to William Bruce Bailey.

His step-father’s household was apparently very religious, and Axl Rose had to attend church services three to eight times per week. He was subjected to harsh, abusive and oppressive upbringing including physical and sexual abuse to him and his sister by his step-father. His only relief was music. He was attracted to music from an early age and had begun singing in the church choir from the age of five. He, along with his sister and half-brother, performed at church services adopting the name Bailey Trio. While receiving his high school education at Jefferson High School, he participated in the school chorus and studied piano.

After discovering the true identity of his father, Axl Rose became a juvenile delinquent in Lafayette. He was arrested more than 20 times on charges such as public intoxication and battery. He also served many short-term jail terms. In December 1982, he moved to Los Angeles, California, after the local police threatened to charge him as a career criminal. He joined the band AXL shortly after relocating to Los Angeles and legally changed his name to W. Axl Rose as suggested by his bandmates and friends. He officially used the name Axl Rose for the first time while signing a contract with Geffen Records in March 1986.

Axl Rose joined the band ‘Rapidfire’ after having met guitarist Kevin Lawrence of the famed band. In May 1983, they recorded a four-song demo which could be released only after a protracted legal battle in 2014 as an EP, Ready to Rumble. He formed the band ‘Hollywood Rose’ with his childhood friend Izzy Stradlin formerly known as Jeff Isbell after parting ways with Kevin Lawrence.

In January 1984, Hollywood Roses recorded a five-song demo featuring the tracks "Anything Goes," "Rocker," "Shadow of Your Love," and "Reckless Life." The songs were later released in 2004 in the album ‘The Roots of Guns N' Roses.’ In March 1985, Axl Rose and his former bandmate Tracii Guns joined hands to form a new band in the name of ‘Guns N' Roses,’ absorbing their respective band Hollywood Roses and L.A. Guns into it. The new band released an EP in 1986 followed by their breakthrough debut album ‘Appetite for Destruction’ in July 1987. ‘Appetite for Destruction’ though garnered critical acclaim; it fared modestly in the aspect of commercial success selling around 500000 copies in the first year of its release.

However, the mainstream success of the single "Sweet Child o' Mine" coupled with extensive touring by the band were the main factors of the album rising to the No. 1 position on the Billboard 200 in August 1988, and again in February 1989. The album has sold over a staggering 30 million copies worldwide to date. It became the best-selling debut album of all time in the USA with around 18 million copies sold within the country.

The band’s next stopgap album G N' R Lies sold more than 5 million copies in the United States alone, which was released in November 1988. The album and Axl Rose faced stinging criticism for the content of the album and was accused of promoting racist and homophobic attitudes with the song "One in a Million." However, as controversy led to popularity, Rose was hailed as one of rock's most prominent frontmen in the coming days, and his Guns N' Roses band received a cult status among the world of hard rock music.

In 1989, Axl Rose appeared solo on the front cover of the Rolling Stone Magazine. In the following year, the band’s attempt to record a follow-up album of Appetite for Destruction received some setback due to drug abuse by one of the key member of the group, Steven Adler. Though he was replaced by Matt Sorum of The Cult and new blood infused in the band with the joining of Keyboardist Dizzy Reed, the band was unable to record an album. In May 1991, the band went for a two-and-half-year long promotional tour of America. The trip generated a lot of heat and dust, and Axl Rose was particularly accused of his late whimsical arrival on the show, onstage rantings, and antics and even rioting.

In September 1991, Guns N' Roses released two albums simultaneously, ‘Use Your Illusion I’ and ‘Use Your Illusion II.’ The album debuted at No. 2 and No. 1 respectively on the Billboard 200. It was an achievement no other group could accomplish till then. Guns N' Roses appeared together for their final show of The Use Your Illusion Tour on July 17, 1993, at River Plate Stadium in Buenos Aires, Argentina, which happened to be the last appearance of Axl Rose with the band. He went on a hiatus after that and spent three-quarters of a decade as a recluse. Later on, he was seen on and off in public platforms and released a few albums as well.

Axl Rose married Erin Everly on April 28, 1990. They divorced the following year after pregnancy and subsequent miscarriage of his wife within the period. During 1991, he had an affair with Stephanie Seymour, who had a son Dylan. Rose developed an affectionate relationship with the child and got engaged with Seymour in 1993. However, they separated after a few weeks.

Axl Rose was inducted into the ‘Rock and Roll Hall of Fame’ in 2012.