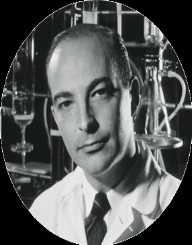 After this, he enrolled in the University of Rochester Medical Center. While at the school, he wrote performed a medical survey to see how common Gilbert’s Syndrome was, which he had. This syndrome caused him to have elevated bilirubin levels. Here, Arthur Kornberg earned his medical degree (and MD title) in 1941. After graduating, he began a one-year medical internship at Strong Memorial Hospital. In 1942, he published the results of his medical survey in a paper called The Occurrence of Jaundice in an Otherwise Normal Medical Student.

In the late 1940’s, Arthur Kornberg went back to school to take summer classes at Columbia University to learn more about chemistry. However, he did not earn any additional degrees from taking these classes.

During World War II, Arthur Kornberg spent time in the United States Coast Guard. While here, he worked as a doctor on his ship. He did this until this service time was up.

After the war, Arthur Kornberg began working at the National Institutes of Health. Here, he worked mostly with nutritional medicines.

He did not enjoy this job. Soon after, he transferred to a laboratory at New York University where he could continue his research. At this point in this life, Kornberg was less interested in Gilbert’s Syndrome and more interested in enzymes.

In 1947, Arthur Kornberg began working in a laboratory at the Washington University School of Medicine. However, he did not stay here for long before transferring back to the National Institutes of Health. Arthur Kornberg also became the medical director for the Physiology Division. While here, he continued his research on enzymes. Some of the research he found on amino acids would later be used for future studies on DNA.

In 1953, Arthur Kornberg left the National Institutes of Health and returned to Washington University. This time, he worked here as a professor. Arthur Kornberg later also became the head of the microbiology department. While here, he also continued his research on enzymes and began research on DNA. It was through this research that he was able to identify and isolate DNA polymerase, which no one had ever done before. This would go on to be one of the most impressive accomplishments of his career.

In 1959, Arthur Kornberg left Washington University and began working as a professor and head of the biochemistry department at Stanford University. Here, he continued his research, now mostly on DNA. He and a close partner, Mehran Goulian, worked together to research DNA biosynthesis. They worked well together, completing their goal in synthesis in 1967. In this study, they found out that DNA works in a double helix, and that it could copy itself.

In 1988, Arthur Kornberg retired from teaching, but he continued to research (mostly with the University of Stanford laboratories). In the last few decades of his life, he researched many different topics but did not make any major discoveries.

During Kornberg’s career, and during his retirement, he spent much time writing books, essays, and other works. Some of his most famous publications are listed below.

All of Kornberg’s awards and accomplishments are due to his work in science. Some of his most prestigious awards are listed below.

Arthur Kornberg was also a member/fellow of the following organizations: American Philosophical Society, National Academy of Sciences, and the Royal Society.

Arthur Kornberg was first married to Sylvia Levy in 1943. Together, this couple had three children. One of his children, Roger Kornberg, also went on to win a Nobel Prize. His other two sons are also scientists. Sadly, Levy died in 1986. He later married Charlene Levering in 1988. Sadly, she died in 1995. He married for the last time to Carolyn Dixon in 1998. This marriage ended in 2007 with Kornberg’s death.

Arthur Kornberg died on October 26, 2007. The cause of his death was respiratory failure. He was 89 years old when he passed away.