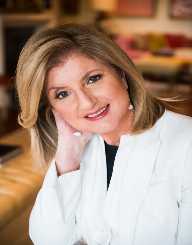 An American native, Arianna Huffington currently holds a multi-millionaire title for selling her successful blog to AOL. She is an all in one kind of persona. In short, Arianna is always perfect when it comes to editing, hosting, commentating, philanthropy, and writing. It wasn’t by chance that she got herself up the ladder. She is a hardworking lady that once got herself to the hospital due to exhaustion in 2007.Early in 2009; Arianna was named as the Twelve Most Influential Women in Media by Forbes magazine. She and Mark Zuckerberg took advantage of social networking to establish their empires. She rose to stardom in 2003 where she vied for a governorship position in California. But she opted to drop in the middle where she went back to support Governor Gray Davis.

Arianna Huffington is categorized in the ENFP group of public figures. Thus: Enthusiastic, Independent, energetic and most of all compassionate. She is undoubtedly known for having excellent communication skills as well as good thoughts towards others. She loves to adventure just as much as she likes to be driven with her day to day goals. She likes to bring out the best in others through her inspiration and motivations. Most of all she is a career-oriented woman who takes advantage of her inner strength to overcome life’s difficulties. She is intensely sensitive and quite shy. These are some of the qualities that define her weaknesses and strengths.

On 15th July 1950 Arianna Stassinopoulos was born in Athens, Greece to a management consultant, Konstantinos, and Eli Stassinopoulos. She had a profound relation with her father than her maternal mother. Nevertheless, her mother came to shape her career life. Even during her developing years, Arianna showed some leadership skills. In her teenage years, she went to the United Kingdom and joined Girton College in Cambridge. It was here that she acceded to a debating group called the Cambridge Union where she was elected as the 3rd female president. In 1970s Arianna completed her education with a master’s degree in Economics. After a short pause, she worked as a television host and a columnist. She was also seen in a part of edition titled Face the music in partnership with Bernard Levin.

In 1973 Arianna commenced with her writing journey. It was the same year that she wrote a book titled The Female Woman which turned to be the best-selling book. It acted as her road to fame in the field of writing. In the mid of 1978, she released her 2nd book titled After Reason that vividly explained the failures of Western society. However, the book didn’t receive tons of remarks as the previous one. This is where she opted to work for several editions such as Cosmopolitan and Vogue. She also landed several jobs in newspaper including Daily Mail and The Spectator.
Early in 1980 Huffington went to New York to solve her issues. After a year she launched her biography that she called Maria Callas. She sold more copies that gave her a chance to transition back to her world of fame. This is where her social life began.

She rose to stardom in 1994 as an active supporter of her late husband, Michael Huffington. She was very conversant and reliable in everything that she did. In the mid of 1996, Arianna teamed up with Al Franken, a broad-based comedian with whom they covered the United States Presidential elections.

In 1998 Huffington landed a job in Los Angeles as a host of the weekly radio show that was known as Left, Right, and Centre. It was here that she got a chance to interview self-attained centrists such as Robert Scheer and Matt Miller. In the new millennium, Arianna declined the NATO to help the Yugoslav wars.

In the mid of 2003, Arianna saw herself running as an independent candidate for the governorship of California. She dropped in the middle which led her to garner 0.60% votes. In the mid of 2004, she acted as a spokeswoman for College Democrats of America Convention. In 2005 she was selected as the panel discussion leader for California Democratic Party State Convention in Los Angeles. To date, she acts as a speaker for a weekend radio program called both side now with Huffington and Matalin.

In the mid of 2008, Arianna saw herself in one of the animated series called The Cleveland Show where she voiced It.She also made a stance on several shows including The L Word, Help Me Help You, How I Met Your Mother and EdTV film.

Early in 2005, Arianna Huffington launched The Huffington Post a broad-based channel that egresses current news. In 2010 she became the chief editor officer of the said media post. The same year, Arianna lend a helping hand to ferry people where she contributed more than ten buses to take people to RFK Stadium. They wanted to go to Stewart’s rally in Washington DC. In 2003 she founded a project known as Detroit along with America automobile company such as the U.S. In 2010 she led an active debate at the University of Buffalo in New York City. Early in 1994 Huffington was accused of publishing Lydia Gasman’s work in her biography. The good thing is that Lydia didn’t report the matter. Another scene happened when Maureen Orth accused Huffington of posting some of her written work in The God’s of Greece book.

When it comes to her personal life, Arianna dated Bernard Levin from 1971 to 1980. In 1986 she married Michael Huffington where they went to live in California as a couple. They were then blessed with two daughters Christina Sophia and Isabella Diana Huffington. The couple parted way in 1997 where Arianna’s husband claimed that he was a bisexual.