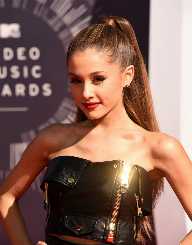 Ariana Grande was born on June 26, 1993, in Boca Raton, Florida, USA. Her parents are Joan Grande and Edward Butera. Her brother is Frankie Grande.

As a child, Ariana Grande would practice acting and singing. Once she hit her teenage years, she began performing in Broadway shows, such as 13 and Cuba Libre. Being in these live shows helped her to gain fame and attention from television talent scouts.

Ariana Grande soon began performing in small parts in television shows, but it wasn’t until 2010 that she made her big break when she began to work for Nickelodeon in the show Victorious. This was the show that kicked off her acting career. She played the silly and talented character of Cat Valentine, who was also one of the good friends of the main character of the show, Tori. She stayed on this show until 2013, when it ended.

The end to Victorious didn’t end Ariana Grande’s work with Nickelodeon. She soon starred in her spin-off series called Sam & Cat. On this show, she starred alongside Jennette McCurdy, who had played the character Sam on another Nickelodeon show, iCarly. The show worked to bring these shows together. Other actors and actresses from their old shows would often guest star on this spin-off series. She worked on this show until its end in 2014.

While working on Victorious and Sam & Cat, Ariana Grande also got into voice acting. She played a character called Princess Diaspro in two series of the Winx Club, and she had a guest part in the show Family Guy and the movie Underdogs.

After working for Nickelodeon, Ariana Grande began taking on more adult parts in television shows and movies. She played the character Chanel #2 in Scream Queens and played Penny Pingleton in the made for TV movie, Hairspray Live! However, since the end of her career with Nickelodeon, Grande has focused more on her music career than on her acting career.

Now, Ariana Grande often appears on late night talk shows and entertainment shows like Saturday Night Live. She sometimes performs in skits or musical acts in these types of shows.

When acting in Victorious, Ariana Grande’s character, Cat Valentine, was a wonderful singer. With the show and the other actresses on the show, she produced several music shorts. Just like her character, Grande is a great singer, but it wasn’t until after leaving Victorious that her singing career truly kicked off.

Ariana Grande produced her first album in 2013 called Yours Truly. It was around this time that she signed on with Republic to produce her albums. Her album was a smash hit, which only encouraged her to keep on singing. Her next album was released in 2014 and was called My Everything. This album did even better on the charts than her first one. Her most recent studio album was released in 2016 and was called Dangerous Woman. This album was more popular than her first, but not as popular as her second. Still, she had some top-ten songs.

To promote her albums, Ariana Grande went on tour around the United States and in other countries around the world. She also produced a compilation album, The Best, and a remix album, The Remix. She also has two extended plays albums: Christmas Kisses and Christmas & Chill.

All of Ariana Grande’s awards are due to her talents in acting and singing. Some of her most impressive awards are listed below.

Over the years, Ariana Grande has dated several celebrities. Since 2013 she has dated the singer, Nathan Sykes; Jai Brooks; the rapper, Big Sean; and the dancer Ricky Alvarez. She is currently dating the rapper, Mac Miller.