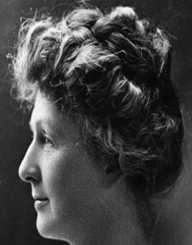 Annie Jump Cannon was born 11th December 1863, to Wilson Cannon, and Mary Jump. She was born in Delaware, United States, and she was the eldest of three girls. Her father was a ship-builder, as well as a state senator. Jump was his second wife. She was very fortunate in the respect that she had a mother who encouraged her to study and to follow her areas of interest. It was her mother who first taught her the constellations.

Annie Jump Cannon studied at the Wilmington Conference Academy, and upon graduation, went on to study at Wellesley College in Massachusetts. It was one of the best academic schools for women. Her mother suggested she study mathematics, chemistry, biology, physics, and astronomy, which Cannon did.

In 1884, Annie Jump Cannon graduated with her degree in physics. She had studied under Sarah Frances Whiting, one of only a handful of female physicists in the U.S. at the time. When she graduated, Annie Jump Cannon was Valedictorian of the college.

After graduation, she moved back home to Delaware, where she was based for the next ten years. She taught herself about photography, which was only starting to be developed, and in 1892 went for a tour through Europe, photographing as she went. Her camera was a Blair box camera, and when she returned home, Blair published her photos in a booklet as a souvenir.

In 1894, Annie Jump Cannon’s mother passed away. She contacted Sarah Frances Whiting, her instructor from college, and asked if there were any positions available. She was hired as a junior physics teacher. It was an ideal situation, as it enabled her to study graduate courses in physics and astronomy while she was there teaching.

She later enrolled at Radcliffe College to continue her studies in astronomy. Radcliffe had been established near Harvard so that the professors at Harvard could repeat their lectures to the young ladies studying at Radcliffe. This was very beneficial for Cannon as it gave her access to the Observatory at Harvard College.

In 1896, Annie Jump Cannon was hired by Edward C. Pickering, to be his assistant at the Observatory. In 1907, she graduated with her Masters from Wellesley College.

As one of Pickering’s assistants, Annie Jump Cannon’s work was to complete the Henry Draper Catalogue. The aim was to map and define every star in the sky. Pickering acknowledged that nobody, male or female, anywhere in the world, could complete the work as quickly as Cannon could.

The Henry Draper Catalogue was funded by his widow, Anna Draper. The men at the observatory provided the manual labor, such as moving the telescopes and taking photographs, and the women analyzed the data, carrying out the astronomical calculations.

Soon after work started on the Draper Catalogue, a disagreement erupted between Antonia Maury (Draper’s niece), and Williamina Fleming, project manager. They couldn’t agree on how the stars were to be classified. Cannon came up with a solution, negotiating a compromise between the women.

Annie Jump Cannon introduced a classification system, based on the Balmer absorption lines. She published her first catalogue of stellar spectra in 1901 and wrote various books and articles on astronomy to raise awareness on the subject. When she first began her cataloging, she classified about 1,000 stars in three years. By 1913, however, she had become so proficient, that she was cataloging around 200 stars per hour.

In 1922, Annie Jump Cannon’s stellar classification system was adopted by the International Astronomical Union. It is still being used today, nearly 100 years later. Her career in astronomy spanned over 40 years. She retired in 1940, but still worked in the observatory. Her hard work and dedication opened the door for other female astronomers to follow in her footsteps.

Annie Jump Cannon has two major works attributed to her.

The first is the system she came up with for classifying stars. Nearly 100 years later, the system is still being used by astronomers the world over.

Annie Jump Cannon led the way for females in the workforce, and she was accredited with many awards and honors in her lifetime. Some of the more notable are as follows:

1921: Honorary Doctorate from the University of Groningen, Netherlands

1931: First female to be elected as an officer of the American Astronomical Society

Annie Jump Cannon never married and didn’t have any children.

When she was younger, she was almost deaf, and it was attributed to scarlet fever. The deafness made it difficult for her to socialize, so Cannon immersed herself in her work instead.

Annie Jump Cannon was a member of the National Women’s Party and a known suffragist who advanced women’s rights.