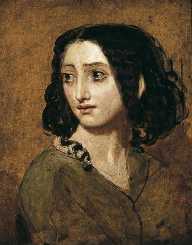 Born on January 17, 1820, Anne Bronte was a British poet and novelist and the youngest of the Bronte literary family. Born from to a poor family Anne Bronte picked up jobs like teaching and served as a governess before commencing her literary ambition. Anne Bronte collaborated with her sisters to publish a volume of poetry, Poems by Currer, Ellis and Action Bell in 1846. Based on her experiences as a governess, she published Agnes Grey in 1847.

In 1848, Anne Bronte published her last novel, The Tenant of Wildfell Hall, considered as the first feminist novel. Though Anne was a good poet and novelist in her own regards, her works were not known as compared to that of her other sisters. This can be alluded to the prevention of republication of her famous work The Tenant of Wildfell by Charlotte Bronte after her death at age 29. Her novels have nonetheless become classics of English Literature.

Anne Bronte was born on January 17, 1820, to Patrick Bronte and Maria Branwell at 74 Market Street in Thornton, West Yorkshire, England. He was the youngest child of six by his parents. Her father was a clergyman and her mother a grocery seller. When she was four months, the family moved to Haworth Parsonage where Bronte was appointed a perpetual curacy. When Anne was a year old, her mother fell ill of what is said to be uterine cancer and died on September 15, 1821.

Patrick unsuccessfully tried to remarry as he wished to have maternal care for his children. The children were, however, catered for by Elizabeth, Maria’s sister who had come to nurse her when she was sick. Through to Elizabeth’s strict nature and her principles of choosing respect to love, there was less love between her and the older children. Anne Bronte and her siblings moved to Crofton Hall in Crofton, West Yorkshire in 1824. They were educated at the Clergy Daughter’s School at Cowan Bridge in Lancashire. They later returned home after the death of Elizabeth and their eldest sister.

Patrick then took a child of their education at home with the help of their aunt for about five years. Anne Bronte was taught music and drawing and also piano lessons with her sisters Emily, Bradwell from the organist at the Keighley church. John Bradley of Keighley also gave them some art lessons. With a well stock library of his father, the sisters occupied themselves with reading books on literature, history, biography and geography and also examining articles from Blackwood’s Edinburgh Magazine, The Edinburgh Review, and Fraser’s Magazine.

Anne Bronte later received education at Roe Head where her sister Charlotte was a teacher. She made some friends while there after two years of her studies there was awarded a good conduct medal in December 1836.

At age 19, in 1839, Anne Bronte sought to be employed in order to be self-reliance since her father had no private income and needed to save herself from the poverty of the family. The only option then for educated poor women was teaching or working as a governess. Hence she chose to work as a governess in April 1839, for the Ingham family at Blake Hall near Mirfield.

Anne Bronte had a challenge of controlling the spoilt and disobedient children in her charge, and with this, she could not achieve any better results in educating them. All complaints made by Anne Bronte to the Inghams to bring their children to other proved futile but was rather criticised for being incompetent. Anne was dismissed from her post as the Inghams were dissatisfied with her work. She joined her family home at Christmas in 1839. Anne’s experience, as a governess in Blake Hall, would influence her work, Agnes Grey. From 1840 to 1845, Anne Bronte gained another position as a governess to the children of the Reverend Edmund Robinson and his wife Lydia, at Thorp Green Hall.

Anne Bronte initially encounter at Thorp Green Hall was just like at her first post at Blake Hall. Here she was in charge of four children Lydia, aged 15, Elizabeth, aged 13, Mary, aged 12, and Edmund, aged 8. She was able to overcome all the initial challenges and become the favorite of her employers. She went with them on holidays especially to Scarborough and spent at least five weeks each summer there from 1840 and 1844. Her experience here was also included in the book Agnes Grey and some part of The Tenant of Wildfell Hall. In 1842 while in the plantation of Thorp Green, she produced the three-verse Lines Composed in a Wood on a Windy Day published under the penname Acton Bell in 1846.

Anne Bronte later secured a job at Thorp Green for her brother Branwell who at the end entered into a relationship with his Robinson’s wife, Lydia. In June 1846, she resigned her position as governess, and his brother was later fired after Robinson found out about the relationship.

Anne Bronte and her sisters lived with their father in the summer of 1845 and that was when an idea of getting their individual poems combined and published. With this Anne and Emily contributed 21 poems each and Charlotte also came up with 19. The sister told nobody about their intentions and with funds from Aunt Branwell, they got their collection published. The published the work with the pennamesCurrer, Ellis and Acton Bell for Charlotte, Emily and Anne Bronte respectively to disguise themselves from being revealed as women.

In May 1846The book, Poems by Currer, Ellis and Acton Pen was released on sale. The book performed abysmally with only two copies sold within the first year. Anne’s next work The Narrow Way, was published by The Leeds Intelligencer and Fraser's Magazine in December 1848 under her pen name Acton Bell. Her poem The Three Guides had been published earlier by Fraser’s Magazine. The sister also worked on their debut novel each coming up with one.

Anne Bronte wrote Agnes Grey, Charlotte with The Professor and Emily Wuthering Heights. They struggled to get publishers but later Anne and Emily’s works were accepted by Thomas Cautley Newby but rejected Charlotte’s work. Charlotte later came up with Jane Eyre, which was accepted by Smith, Elder & Co. Charlotte's work was fast produced while that of her sisters still delayed with the publisher. It was later released in 1847 and performed well with Emily’s Wuthering Heights being the most preferred choice over Agnes Grey by Anne Bronte

Anne’s next novel was The Tenant of Wildfell Hall, published in June 1848. The novel was an instant success and was sold out within six weeks. In August same year, the second edition was published. The book novel was met with fierce critics including from her sister Charlotte. Anne Bronte, however, defended her depictions of the characters in the novel, saying that it was better to depict characters as they truly were than how they would prefer to be depicted. The sister became popular with their work and republication of their previous works became eminent.

The Bronte family was struck with tragedy with the death of three members including Anne Bronte Branwell was first to die September 24, 1848, of marasmus now believed to be tuberculosis. The next to follow was Emily who also died at age 30. Anne Bronte was heavily hit by the death of Emily, and later that year she was also diagnosed with advanced tuberculosis.

Anne Bronte grew weaker and thinner and decided to travel to Scarborough with the aim of being in a new environment could improve her health. Anne, however, died on May 28, 1849, in Scarborough where she was buried.