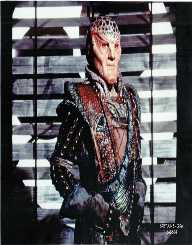 American actor Andreas Katsulas was born in St Louis Missouri. He was of Greek ancestry.

Intent on becoming an actor from a young age, Andreas Katsulas was awarded an undergraduate degree in theatrical arts from Saint Louis University and then did an MA in theatre at Indiana University.

After graduating Andreas Katsulas began his acting career at the Loretto-Hilton Repertory Theatre in St Louis. Katsulas then worked in theatre in Boston before moving to New York City where he appeared in off-Broadway productions. His next career move was to join Peter Brook’s International Theatre Company (1971-1986) which was based in Paris but toured internationally.

Andreas Katsulas moved to Hollywood in 1986 acted in The Sicilian (1987). This was followed by Someone To Watch Over Me (1987) and Edward’s Sunset (1988). He became well-known with sci-fiction fans for his role as ambassador G’Kar in the television series Babylon 5. He was also in the television movie, The Death of the Incredible Hulk and guest starred in various television shows including Murder She Wrote, NYPD and The Next Generation.

Andreas Katsulas died on the 13 February 2006 of lung cancer. He had a son and a daughter from an early marriage. His second wife was Gilla Nissan Katsulas.