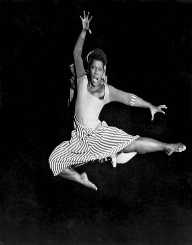 Alvin Ailey was born on the 1st of December 1931 in Rogers Texas. His mother was a seventeen-year-old teenager Lula Elizabeth Ailey. He did not grow with his father because he abandoned them when Alvin was only six months old. His father’s name was also Alvin.

Alvin Ailey grew up in a time of racial segregation and conflict. He lived in poverty and assisted his mother with upkeep by picking cotton. He was an African American who lived in fear of White Americans. This fear took root in him even further when he witnessed his mother being gang raped by a group of white men at the age of five.

Like many others of their demography in the great depression era, Alvin moved with his mother when he was twelve to Los Angeles in search of better employment.

He first went to a Junior High school in a mostly white area but relocated to a school for African Americans because of the persistent racial tension of his time.

Alvin fell in love with dance when he went on a junior high school class trip where he witnessed concert dance for the first time.

In pursuit of his passion for dance at the age of eighteen, he began studying modern dance with the director of the Lester Horton Dance Theater, Lester Horton. The company was the first racially integrated dance company of the time. He joined the group a year later, in 1945.

In the first couple of years of his pursuit, Alvin kept his dancing career secret from his mother.

In 1951, Alvin Ailey left Los Angeles briefly to further his studies in dance in San Francisco. During the time, he danced in several nightclubs. Upon completion of his studies, he returned to the Horton Company.

During this time he also got a chance to perform in several Hollywood films and television appearances. This continued even more after he started his own company. In 1953, Horton died, and Alvin was made the director of the dance company at the young age of twenty-two. He began to create his dance choreographies from here. He made his Broadway Debut and started to gain a lot of recognition hereon.

In 1958, Alvin Ailey founded his own company. The company became a tremendous success and revolutionized dance in his time and beyond. The theater struggled for some years. But it pulled through and became an international company in a time when most dance companies never went beyond local recognition.

Alvin created unique choreographies, drawing inspiration from the Spirituals, gospel songs and blues he was exposed to as a youngster.

Alvin Ailey achieved activist status due to his boldness in forming a multi-racial dance company in the peak of racial tension. He had built his company during a time of protests against desegregation. He never allowed race to determine entry into the business. Every potential member was judged solely based on ability.

The company started to gain international recognition in the mid-60s when the United States’ state Department sponsored him on expensive international tours. He debuted his masterpiece Masekela Language in 1969. It was a piece that probed the experience of being black in South Africa. He also created some of his most memorable choreographies in the 7os. Like ‘The Mooche’ (1975), ‘Night Creature’ (1975), ‘Pas de "Duke"’ (1976), and ‘Memoria’ (1979).

Alvin Ailey was an enthusiastic, ambitious and brilliant person. He believed in justice and fairness. He never allowed his experiences of childhood affect how he related to people from all races. He gave everyone equal opportunity.

He was a closet Homosexual. He never came out about his sexual orientation for fear of stigma. This made him keep his personal life and secret relationships jealously guarded against the public eye.

The dance icon, Alvin Ailey died on his fifty-eighth birthday on the 1st of December 1989.

Alvin Ailey’s passion and his pursuit of it revolutionized the participation of racial minorities especially African Americans in concert dance. He is the founder of the Alvin Ailey American Dance Theater one of the leading inclusive theaters of his day and today.

He created a total of seventy-nine unique choreographies during his lifetime. However, through his legacy, more contributions are still being made to dance by him after his death.

He has received many honors for his contribution to dance, both in his lifetime and posthumously.

In 1977 he was awarded the Spingarn Medal from the National Association for the Advancement of Colored People (NAACP).

He received the Kennedy Center Honors in 1988.

For his contribution to the world, a crater was named in his honor in Mercury.

Alvin Ailey was posthumously awarded the Presidential Medal of Freedom in 2014 which is the highest honor in the United States of America.