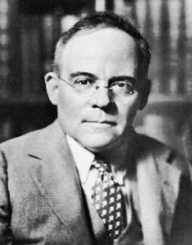 The American poet John Orley Allen Tate was born on the 19 November 1899 in Winchester, Clarke County, Kentucky. He was the son of Eleanor Parke Custis Varnell and John Orley Tate. The couple had four children: three sons as well as a daughter who had died at the age of two.

Between 1922 until 1925  Allen Tate was the original editor of the poetry magazine The Fugitive which was published in Nashville Tennessee. The magazine was named after a group of Southern poets known as The Fugitives. Members of the team included Robert Penn Warren, Donald Davidson, Merrill Moore, John Crowe Ransom, and Tate. Their stated aim was that they were in favor of formal poetic verse and they were also concerned with keeping traditional values going in the South as urban industrialization encroached.

His early poetry showed the influence of Baudelaire, Ezra Pound, Corbiere and Edwin Arlington Robinson.  Allen Tate was also an admirer of T.S. Elliot and felt an affinity with him regarding style and the content of his poetry. In his twenties, he was living in Greenwich Village, New York with his wife Caroline Gordon where he worked as a freelance literary critic. He had married Gordon in May 1925, and their daughter Nancy was born in September. In 1927, his famous poem Ode to the Confederate Dead was published. The poem was based on a Confederate cemetery that he saw as a child in Richmond.

Mr. Pope and Other Poems published by Minton, Balch & Company in 1928 was his first book of poems. In 1928 Allen Tate and his wife were both awarded Guggenheim fellowships, and they spent some time in Paris, France where they mixed with Gertrude Stein expatriate group including F. Scott Fitzgerald, Ernest Hemingway, and Ford Maddox Ford. He also met T.S. Elliot in London.

The couple returned to the United States in 1930. Allen Tate began his career as a writer and academic, teaching, lecturing and publishing. His only novel The Fathers, about the Civil War, was published in 1938 and Tate’s reputation as one of the leading literary men of his generation. Shortly afterward, in 1939 he became a resident poet and head of the creative writing programme at Princeton University.In 1942, he was named chair of poetry at the Library of Congress. He was the editor of The Sewanee Review (1944-1947) and was a mentor to many emerging and younger poets and writer.

In 1948 Allen Tate was on the jury who awarded the first Bollingen Prize to Ezra Pound. He then spent three years at New York University and in 1951 was appointed Professor of English at the University of Minnesota from 1951 until his retirement in 1968.

In 1943 Allen Tate was named as the United States Poet Laureate. Tate won numerous awards and prizes including the Bollingen Prize (1956) Collected Poems:1919-1976 won the Lenore Marshall Prize in 1977.

Allen Tate married novelist Caroline Gordon in 1924. In 1945 Tate and Gordon divorced then remarried but later divorced again. His second wife was the poet Isabella Gardner whom he married in 1959. When Helen Heinz, a nun, started attending his lectures, they fell in love. Heinz left the convent, and after divorcing Gardner, Allen Tate married Heinz in 1966. The couple had twins sons, born in 1968. One of the twins died from an accident just before his first birthday. They had another child in 1969, also a son.

Allen Tate died on the 9 February 1979 in Nashville, Tennessee. He had been suffering from emphysema for several years and had also gone blind. Tate was survived by his wife Helen, daughter Nancy from his first marriage to Caroline Gordon and two sons.

The poet's papers are at the Firestone Library, Princeton University.

A review by Jonathan Yardley of a book by Professor Walter Sullivan of the English Department of Louisiana State University that severely criticised Allen Tate appeared in the Washington Post on the 16h November 1988. Acknowledging his eminence as a poet, Sullivan attacked Tate’s character with scathing attacks on his so-called womanizing, professional jealousy, pettiness, editorial interference and money-grabbing ventures in his later life when with a young wife and two children, he was concerned about leaving them well-provided for. (Allen Tate: A Recollection By Walter Sullivan Louisiana State University Press, 1988).