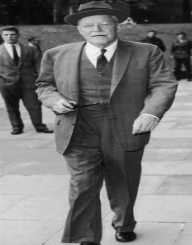 The former head of the CIA Allen Dulles was born on the 7 April 1893 in Watertown, New York. He came from a political family, and his grandfather, as well as an uncle, had served as Secretary of State.

Allen Dulles graduated from Princeton University in 1916. He joined the US diplomatic service, and while serving he studied for a law degree at George Washington University, graduating in 1926.

After graduating from law school, Allen Dulles worked for the law practice Sullivan & Cromwell on Wall Street in New York City. His brother John Foster was a partner with the firm.

Allen Dulles was appointed the head of the Office of Strategic Services in Berne, Switzerland in 1942. German diplomat and anti-nazi informer Fritz Kolbe was feeding the office information details of German spies and the development of jet fighters.

The American Congress created the CIA in 1947, and by 1951 Allen Dulles had been appointed the deputy director of the CIA. President Dwight D. Eisenhower made him director of the CIA in 1953. He was the first civilian director; other directors had all been military personnel. The CIA was charged with assisting the Eisenhower administration to implement their New Look national security policy focusing on combating communist aggression.

Dulles was avowedly anti-Communist, and along with his brother John, Foster was involved in many covert activities and operations against perceived and real Soviet Union allies during the Cold War. The CIA was involved in the overthrowing of the Iranian government in 1953 and the following year, the Guatemalan government.

When President John F Kennedy took office, he had conflicting ideas on the power of the CIA. The failure of the Bay of Pigs invasion (1961) caused further tension with President Kennedy holding Dulles responsible for the failure. Allen Dulles subsequently resigned in 1961.

His father was a Presbyterian minister.

Allen Dulles married Clover Todd in 1920, and the couple had three children. The couple remained married until his death in Washington DC on the 29 January 1969.

Following the assassination of President Kennedy, President Johnson set up the Warren Commission to investigate the murder, and Allen Dulles was one of the seven commissioners chosen.