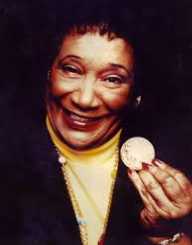 Olympian Alice Coachman Davis was born on the 9 November 1923 to Fred and Evelyn Coachman in Albany, Georgia in the United States. She showed an early talent for athletics.

Alice Coachman was a pupil at Monroe Street Elementary School before enrolling at Madison High School. She began studying dress-making at Tuskegee Institute college in 1943 and was awarded a degree in 1946. Coachman furthered her studies by completing a BSc in Home Economics (1947) from Albany State College.

Alice Coachman won her first national title at the 1939 National AAU tournament at Waterbury, Connecticut. The Tuskegee Institute awarded Coachman a scholarship with a place in their high school programme where she was able to compete with against African-Americans throughout the South, which at that time was still segregated.

During the four years, she was at the Tuskegee Institute, Alice Coachman competed in the Amateur Athletic Union of the United States and won 23 gold, four silver, and three bronze medals. She also competed in the National AAU track and field events, winning three gold, six silver, and two bronze medals. Between 1939 and 1948 Coachman won the U.S. national high jump championship every year.

Alice Coachman broke the 1932 Olympic record held jointly by Americans Babe Didrikson and Jean Shiley and made history by becoming the first black woman to win Olympic gold. King George VI presented Alice Coachman with the gold medal. When she returned home to Albany, George, the city held a parade to honor her achievement. She was invited to the White House where President Harry S. Truman congratulated her.

Alice Coachman married Frank Davis, and the couple had two children. She died, aged 90, on the 14 July 2014 in Albany, Georgia in the United States.

The Alice Coachman Track and Field Foundation was founded in 1994 by Coachman to assist former Olympic competitors and youth athletes.