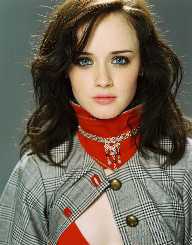 Kimberly Alexis Bledel was born on the 16th of September 1981 in Houston Texas united states of America. Alexis was born to Mexican and Argentinian parents named Nanette and Martin Bledel respectively. Her first Language was Spanish.  Alexis Bledel only started to learn English after she started school.

Alexis Bledel started school at the St Agnes Academy Catholic School in Houston.Allelxix was a timid girl. In her bid to help bring her daughter out of her shyness, Nanette Bledel got Alexis enrolled in a local theatre. During this time, Alexis made appearances in local productions like Our town and The Wizard of OZ. Alexis also appeared as an unaccredited extra in a comedy-drama, Rushmore in 1998.

Alexis Bledel was spotted by a talent scout at the mall while she was still a teenager. Thus began her modeling career. Bledel started attending Page Parke’s Modelling school in Houston. Alexis started to work locally as a model and soon after she began to land international Modelling jobs.  Alexis Bledel moved to New York and spent a short time studying film. Alexis spent one year at the New York University’s Tisch School of Arts. She soon landed the acting role that firmly established her as an actress.

In the year 2000,  Alexis Bledel was selected to star alongside Lauren Graham in the Comedy-drama Gilmore Girls. She played Rory Gilmore, the daughter of Lorelai Gilmore in the series that traced the life of single mother and daughter duo.

Alexis Bledel is best known for her seven yearlong roles in the sitcom. The seven seasons ended in 2007. During the time Allwlxis also picked up some pretty diverse characters.

Alexis Bledel's debut into feature film came in 2002. Here she played Winnie Foster in the fantasy romantic drama, Tuck Everlasting. Alexis after that landed a co-starring role-playing artist Lena Kaligaris in The Sisterhood of the Traveling Pants in 2005.Alexis reprised this role in the 2008 sequel Sisterhood of the Traveling Pants party 2. In the same year, 2005 she co-starred in the crime thriller Sin City where she played the role of a prostitute named Becky. Other she has starred in include; Romantic comedy, The Good Guy in 2009; Comedy, Post Grad in 2009; Historical drama, The Conspirator in 2011; Comedy crime drama, Violet, And Daisy in 2011; Hit Series Mad Men in 2012, amongst others. Alexis Bledel reprised her role from her first acting role, Gilmore Girls in a Netflix sequel titled Gilmore Girls: A Year in the Life in 2016.

Alexis Bledel is set to appear in the upcoming television series The Handmaid’s Tale. Here Bledel plays the main character’s companion named Offred in this futuristic dystopian series. The series is set to premiere on the 26th of April 2017

Alexis Bledel has received most of her awards and nominations for her role in the drama that placed her in the limelight, Gilmore Girls. For this  Alexis Bledel

Nominated for Teen Choice Awards for Choice Actress in 2001

Nominated for OFTA Television Awards for Best Supporting Actress in 2002

Broadcasting Film Critics Association Awards for the best acting ensemble for her role in Sin City in 2006 amongst others.

Alexis Bledel has also received other recognitions as a public personality.Alexis was voted one of the 25 Hottest Stars Under 25 in Teen’s People in 2002.

Bledel was named one of the 25 Most Stylish New Yorkers in Us Magazine.

Alexis Bledel, despite being a star actress and public personality was never able to get rid of her shyness. Alexis even found it quite challenging to get into her role as Rory Gilmore in Gilmore GirlsAlexis has however been able to produce quality performance in her acting despite this.

Alexis Bledel dated one of her co-actors on Gilmore Girls, Milo Ventimiglia for four years between 2002 and 2006.

Alexis Bledel met her husband, Vincent Kartheiser in 2012. He was a co-star in the AMC series Mad Men in 2012. They got married in California in June 2014. The couple got their first child in 2015.