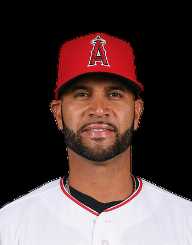 Albert Pujols spent much of his childhood and teenage years in the Dominican Republic, but he moved to Missouri when he was 16 years old. He lived with his grandmother, instead of his parents, for a majority of his young life.

In the states, Albert Pujols attended the Fort Osage High School. Here, he played baseball. His love of this sport helped him to make many friends and to assimilate well into his new country's culture. After he graduated from the high school in 1999, he went on to attend the Maple Woods Community College. While at the college, he continued to play baseball. It was actually at this school in which he was noticed and drafted to join the St. Louis Cardinals professional baseball team.

Albert Pujols debuted in the 2001 baseball season. Other baseball players were skeptical of how he would do, but he proved them all wrong. He had a magnificent streak and even won several awards in his first season, and in the seasons to come. While playing for the Cardinals, he helped the team to win two World Series (2006 and 2011). He also made many records. He played for the Cardinals for 11 seasons before switching teams.

After leaving the Cardinals’ team, Albert Pujols decided to work as a free-agent. In 2011, he signed on with the Los Angeles Angels of Anaheim. He did not play as well as he had for the Cardinals, as he was older now and had suffered several injuries while playing baseball in previous years.

However, he did still earn awards and help his team make some major wins. As of 2017, he continues to play for this team, and he has signed a ten-year contract with them, so he is likely to stay on the team for years to come.

Throughout his impressive baseball career, Albert Pujols has won many awards. Some of his most prestigious awards are listed below.

National League Rookie of the Year (2001)