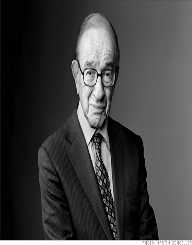 Alan Greenspan was born 6th March 1926, to Herbert and Rose Greenspan. He was born in New York City, United States, in the suburb of Washington Heights. His parents were of European Jewish descent, and his father was a stockbroker and stock market analyst in New York City.

Alan Greenspan studied at George Washington High School, and he graduated in 1943. Alan Greenspan was musically inclined, and he played both the clarinet and saxophone. He did further musical studies at the Juilliard School during 1943 and 1944, before enrolling at New York University in 1945.

While studying music, Alan Greenspan started to make some political connections such as Leonard Garment, who would become Special Counsel to Richard Nixon.

Alan Greenspan then enrolled at Columbia University to study advanced economics, but he dropped out shortly after.

Alan Greenspan received his Ph.D. in economics from New York University in 1977. When he became Chairman of the Federal Reserve Board in 1987, he requested that his dissertation is removed from the university. The dissertation did appear later though, and it was said to include the topic of excessive house prices, and even predicted the burst of the housing bubble.

Alan Greenspan’s career began while he was still doing his studies. He worked at the Wall Street investment bank, Brown Brothers Harriman, under the direction of Eugene Banks, the Managing Director. In 1948, he joined The National Industrial Conference Board as an Analyst. The Board is a “think tank” for business and industry. He was in the role until 1953.

Alan Greenspan served Richard Nixon in 1968 as his coordinator on domestic policy, and through the following years served as a corporate director for several of the largest companies in the United States, including, Automatic Data Processing, Mobil Corporation, and J.P. Morgan & Co.

In 2000 when Alan Greenspan raised interest rates on several occasions, he was criticized by many as causing the burst of the dot-com bubble. There were others, though, that believed he waited until the bubble burst and tried to clean up the mess that followed.

In 2001, Alan Greenspan cut interest rates several times in the wake of the September 11 attacks. There were also several corporate scandals that were causing chaos in the economy, so the interest rate cuts were to help settle things down economically. By 2004, the price of gold was higher than its 12-year moving average. Critics of Greenspan believed it was because of his monetary policy.

Alan Greenspan then advised the George W. Bush administration to get rid of Saddam Hussein so that oil markets would not be disrupted. He believed the deposing of Hussein was more important than ousting Bin Laden.

In 2007 and 2008, Alan Greenspan was hired by several large players in the U.S. economy, including Pacific Investment Management Company, Deutsche Bank, and Paulson & Co, a hedge fund.

Alan Greenspan predicted the housing bubble would burst with large declines in home values. The subprime mortgage industry did just that in March 2007. Many banks and lenders filed for bankruptcy. There was a congressional inquiry, and in October 2008, Alan Greenspan admitted his error in not regulating as he should have. He believed the market would self-regulate, but it didn’t. Alan Greenspan wrote his memoir, The Age of Turbulence: Adventures in a New World, which was published in 2007.

Alan Greenspan married Joan Mitchell in 1952. She was a Canadian artist. The couple had their marriage annulled within 12 months.

In 1984, he started dating Andrea Mitchell, a journalist. The couple married in 1997.