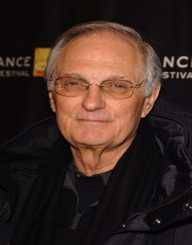 Alan Alda’s talent came from his father, Robert Alda. He grew up in a sitcom environment with the likes of Vaudeville and Burlesque theme. Robert Alda wanted his son to become an avid doctor but the young man’s urge to perform grew stronger. Alda’s acting career started when he played at Cleveland Playhouse. He then made his first debut with Gone Are the Days film in 1963.Besides, Alan is an eminent director, author, and screenwriter. He has showcased his thespian skill for over four decades. He mostly rose to fame as Hawkeye Pierce under M*A*S*H television series. Throughout his career, Alan has garnered over five awards.

On January 28, 1936, Alphonso Joseph D’Abruzzo was born in New York in the United States to Joan and Robert Alda. His father was a passionate dancer, singer, and actor while his mother was once queened as a beauty pageant winner. Antony Alda is Alan’s half-brother who is also an actor. Throughout his childhood life, Alan’s father traveled with him from one place to the next, especially in the US. It was here that he came to know about solid performances such as stage shows and theater roles. At seven years old, Alan underwent several treatments to fight polio. His mother took extra time with him just to make sure that her child will grow to be a robust and healthy man.

Alan joined Archbishop Stepinac High School for his early education. He then entered Fordham College in the Bronx where he graduated in 1956.In the same year; he joined Reserve Officer Training Corps where he served as a gunnery officer or the general charge in Korea.

It was early in 1964 that Alan played a role of Felix in the Owl and The Pussycat stage version. He then appeared in a musical Broadway the Apple Tree which later came to revive a Tony Award for Best Actor recognition. From 1965 to 1968 Alan saw himself on TV game shows such as The Match Game. He followed it up with Paper Lion, The Extraordinary Seaman and finally The Mephisto Waltz in 1971.During the 1980s he took a protagonist role as Hawkeye in M*A*S*H sitcom. He went ahead where he became a writer and director of the said show.

After a short pause, Alda started to appear on big screens where he played Same Time, Next Year, The Four Seasons and the Crime and Misdemeanors in 1989.For the first two movies, Alda garnered Golden Globe nomination. He then appeared in films like Flirting with Disaster, What Women Want where he closed it up with The West Wing in the new millennium.

In 2004 Alan played in The Aviator film in collaboration with Leonardo DiCaprio. In 2015 he starred in 'Bridge of Spies' drama.

In 1956 Alan married Arlene Weiss with whom he met while still in college. The couple got married after Alan’s graduation. They were blessed with three daughters: Eve, Beatrice and Elizabeth. Although his father and mother were staunch Catholics, he turned into a non-believer. As a side note, Alan hates to be called as an agnostic or an atheist.