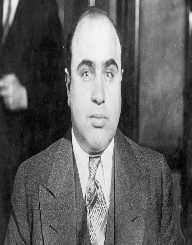 Born on January 17, 1899, Alphonse Gabriel “Al” Capone was an American gangster and co-founder of the Chicago Outfit. Best known as Scarface, he became notoriously famous during the prohibition era and became the boss of the Outfit for seven years.

Al Capone was involved in numerous criminal activities, but his close relationship with the then Chicago mayor, William Hale Thompson and the city police insulated him from being caught by the law. Before rising to become the Boss of the Outfit,  Al Capone served as the bodyguard of his childhood mentor Johnny Torrio. Torrio was the head of a criminal syndicate involved in illegal alcohol supply and the head of the Outfit.

His rosy days ended after the Saint Valentine’s Day Massacre of gang rivals that resulted in the death of seven men and was subsequently tagged as "Public Enemy No. 1". Several influential people in Chicago demanded that government take action after the incident and with that he was caught by the law. He was sentenced to 11 years after being charged with tax evasion in 1931 but was released after eight years on health grounds.

Al Capone was born on January 17, 1899, in Brooklyn, New York to Italian immigrants, Gabriele Capone, a barber and Teresa Capone, a seamstress.  Al Capone had eight other siblings some of who became involved in his criminal activities. His siblings were Vincenzo Capone who changed his name to Richard Hart and served as a prohibition agent in Homer, Nebraska. The others were, Raffaele Jame Capone, Salvatore Frank Capone, Matthew Capone, Ermina Capone, Ermino John Capone, Albert Capone and Mafalda Capone. Raffaele and Frank were involved in his businesses. While Raffaele took charge of his beverage industry, Frank worked in the criminal empire.

After arriving in the United States of America, the Capone family settled in 95 Navy Street in the Navy Yard. The family later moved to 38 Garfield Place in Park Slope Brooklyn when A1 was eleven years old.

Al Capone attended a Catholic school and was a brilliant chap but had problems conforming to rules and regulations of the school. He was expelled from the school at age 14 after he physically assaulted a female teacher by hitting her in the face. This act ended his education, and he started to pick up odd jobs around Brooklyn. As a teenager, he admired the gangster, Johnny Torrio who he regarded as his mentor.

Growing up,  Al Capone involved himself with several gang groups, which build him into a notorious gangster. He was first involved with the Junior Forty Thieves and later joined the Bowery Boys. Gaining grounds in crime activities, he joined the Brooklyn Rippers and moved to the Five Points Gang, which was a very powerful one based in Lower Manhattan. Capone was then employed and mentored by a fellow gangster, Frankie Yale as a bartender in Harvard Inn, a Coney Island dance hall and saloon. Working at the door at a Brooklyn nightclub, Capone unintentionally insulted a woman, and her angered brother Frank Galluccio, slashed Capone’s face. This gained Capone the nickname Scarface, a name he despised so much.

Leaving in New York since childhood,  Al Capone left for Chicago at age 20 upon the invitation of Johnny Torrio as an enforcer. His first work there was as a bouncer in a brothel. He was able to raise enough money to purchase a small house for US$5,500 at 7244 South Prairie Avenue in Park Manor neighbourhood on the city's south side in 1923. Capone became known in the city as a boxing promoter and his name appeared newspaper sports pages. On May 11, 1920, when then gang leader Colosomo was murdered, Johnny Torrio took over the Colosomo crime empire.

Al Capone then became his right hand as they run the biggest Italian organized crime group in the city. During his leadership,Terrio became involved in dispute solving as he did not want to be dragged into gang wars. He therefore negotiated agreements over the territory of gang groups.

However,  Al Capone could not solve the dispute between North Side Gang, led by Dean O’Banion and the Genna brothers who were close allies of Torrio. Torrio, therefore, agreed to the murder of O’Banion, which happened in October 1924 in O’Banion’s flower shop. After his death, Hymie Weiss became the head of the North Side Gang and supported by Vincent Drucci and Bugs Moran whothen resolved to revenge O’Banion’s death.

Al Capone on January 1925, was attacked unhurt but Torrio was not lucky as he was shot several times as he was returning from a shopping trip twelve days after the attack on Capone. Torrio resigned as head of the gang after recovering and handed over the organisation to  Al Capone who was at the time 26 years old. The organisation was involved in illegal breweries and transportation network as far as to Canada. Their activities were always covered by political and law enforcement protection making them untouchable. Al Capone leadership was different from his predecessor as he used a violent approach in raking in more revenues. He resulted to browning up the premises of establishments that refuses to purchase his liquor and this approach caused the death of over 100 people in the 1920’s. Known for wearing costly and fashionable jewels,

Al Capone expanded the business dealings by venturing into cigars, suits, gourmet food and drinks. Avowed to take revenge on O’Banion’s death, the North Side gang started on Capone’s close allies as his driver was tortured and killed. The gang also used a ploy outside the Capone headquarters at the Hawthorne Inn to draw him to his windows in order to assassinate him on September 20, 1926. With gunmen placed at vantage points and in cars, they fired several gunshots into the window using Thompson submachine guns and shotguns but he was able to escape unhurt. The leader of the North Side Weiss was killed outside the O’Banion flower shop three weeks after the attack on Capone. In revenge, his second-hand men, Moran and Drucci also killed Capone’s friend and Hawthorne’s restaurant owner.  Al Capone became security cautious and trod carefully.

Though it was not confirmed,  Al Capone is believed to have orchestrated the 1929 Saint Valentine's Day Massacre in his bid to get rid of Bugs Moran who was the leader of the North Side Gang. The attack that took place on February 14, 1929, saw seven gunmen disguised as police being signaled from Capone’s lookout to start a raid. The gunmen lined up some seven men along a wall and gunned them down.

Al Capone was then summoned to testify on violations of the federal Prohibition Law before a Chicago grand jury but said he was unwell. He was arrested by FBI on March 27, 1929, after testifying to the grand jury and charged with contempt of court for faking illness and refusing to appear before the court in the earlier summon.

Al Capone served a prison term in May 1929 in Philadelphia Eastern State Penitentiary for carrying a gun during his visit there. In March 1930, he was listed as the number one Public Enemy on an unofficial Chicago Crime Commission’s list. Capone was charged with income tax evasion and violations of the Volstead Act and arraigned before the court presided over by James Herbert Wilkerson in 1931.  Al Capone was convicted on October 17, 1930, to serve eleven years in prison and fined $50,000 plus $7,692 for court cost. He was also made to pay $215,000 with interest for his back taxes.

Al Capone was married to Mae Josephine Coughlin on December 30, 1918. Since he was under age 21 during the marriage, his parents had to write in the content of the marriage. They had a son Albert Francis "Sonny" Capone. He died on January 25, 1947, from cardiac arrest.