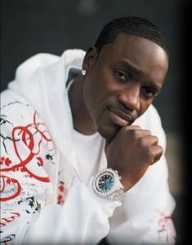 As soon as you hear his songs and voice, you will be aware that that’s Akon and no one else. From dance, R&B to hip-hop, his soulful voice is one of a kind. Not only is he associated with the music industry but also makes other people smile. He believes in the power of light for all Africans, therefore going out of his way and making sure that rural Africa is as bright as the sun. His musical journey started way back when he loved to compose different lyrics. His father, Mor Thiam, a jazz musician showed him the ropes at his tender age. He is famously known for his song ‘Mama Africa’ as well as reggae music titled ‘Ghetto.’

Aliaune Thiam was born on April 16, 1973, in Missouri, St.Loius United States. He spent his short life in Senegal and eventually moved to the USA, New Jersey with his family. That is where he discovered R&B and hip-hop music. He loved to record his songs and tracks in a local home studio. He later released his debut album titled ‘Trouble’ in 2004.The theme of the song illustrates different genres especially the African style as well as Southern and East Coast beats. Akon joined Clark Atlanta University in Georgia, but he dropped out before graduating. He opted to concentrate on his music career. That is where he met with prominent people in the music industry such as Wyclef Jean.

After his debut album in 2004, Akon produced his second album called ‘Konvicted’ in 2006.Selected singled topped at the Billboard hit chart. To get a large volume of a genre, Akonpermitted other celebrities to use his vocals. He found himself collaborating with Whitney Houston, Lionel Richie, and Gwen Stefani. He also got a chance to sing with Michael Jackson before he died in the ‘Hold My Hand.' Afterward, Akon co-wrote one of Lady Gaga’s biggest songs ‘Just Dance.’ Beyond his career, Akon managed to create his clothing line known as ‘Konvict and Aliaune.' He has also managed to establish several real estates. He is the founder of ‘confidence Foundation’ that empowers both the US and Africa youth to focus on their talents.

Throughout his teenage life, Akon passed through different legal challenges. His criminal background was exaggerated when he was claimed to have spent three years in jail. According to him, he was jailed for several months for possessing a stolen car in 1998.He was later released after his charges revision. In 2007 Akon happened to throw one of his fans off the stage in New York. He then faced criminal charges that were dropped later. After some time, Akon was criticized due to his improper sexual conduct while onstage with and an underage girl in Tobago and Trinidad. The outcome made him lose Gwen Stefan’s sponsorship tour. In his response, he recorded ‘Sorry, Blame it on Me’ hit song.

According to public sources, Akon won’t mind retiring on his musical career. Well, he is also a successful businessman on the other side of life. Being a devoted Muslim, Akon believes in polygamy, but he promised himself never to drink any alcohol or smoke. He has four wives and three children. Both of their identities are unknown to the public eye according to Akon’s private life.