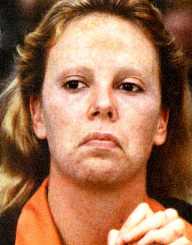 Aileen Carol Wuornos was born Aileen Carol Pittman on February 29, 1956, in Rochester, Michigan. Her mother Diane, 14 years old at the time, married her father Leo Dale in 1954. Just two years later, she filed for divorce and gave birth to their second child Aileen. She also had an older brother Keith.

Wuornos never met her father, since at the time of her birth he was incarcerated. Her father was diagnosed with schizophrenia and convicted of sex crimes against children. He committed suicide in his cell in 1969.

In 1960, Wuornos’ mother abandoned her and her brother with their grandparents, Lauri and Britta. They legally adopted both children in the same year. When Wuornos was 11 years old, she began exchanging sexual activities in school for cigarettes, drugs, and food. She claimed that her grandfather had sexually assaulted and beaten her. She allegedly also engaged in sexual activities with her brother.

Wuornos became pregnant when she was 14 years old from being raped by her grandfather’s accomplice. She gave birth to a boy and placed him for adoption. After giving birth, Wournos dropped out of school. During this time, her grandmother died, and her grandfather kicked her out of their house. She then began working as a prostitute and living in the woods near her grandparents’ home.

Wuornos was first arrested in 1974, when she was 18 years old, for driving under the influence, firing a gun from a moving vehicle and disorderly conduct. Two years later, she was hitchhiking to Florida and met the 69-year-old Lewis Gratz Fell. The two married the same year. However, Wournos kept involving herself in bar confrontations and went to jail for assault. She also hit Fell with a cane, and he got a restraining order against her.

In July 1974, Wuornos was arrested for assault and disturbing the peace. Her brother died of esophageal cancer in 1976, and Wuornos received $10,000 from his life insurance. She spent the money on several luxuries within two months.

In 1981, Aileen Wuornos was again arrested in Edgewater, Florida for a robbery of a convenience store. She was sentenced to prison for one year and was released in 1983. The following year, she was arrested for trying to cash forged checks and was a suspect for revolver and ammunition theft.

In 1986, Wuornos was arrested in Miami for car theft and obstruction of justice. During this time she also met Tyria Moore, a hotel maid. The two began living together, and Wuornos supported her with her prostitution earnings. The two were questioned for an assault regarding an assault and battery with a beer bottle in 1987.

Aileen Wuornos' first victim was Richard Mallory, a 51-year-old Electronics store owner in Clearwater, Florida. He was a convicted rapist, and Wuornos claimed she killed him in self-defense in 1989. His body was found several miles away from his abandoned car, with several gunshot wounds.

The following year, Wuornos killed six other men. Her next victim was a 43-year-old construction worker David Spears, who was shot six times. Charles Carskaddon was a 40-year-old rodeo worker, who was shot nine times.

Aileen Wuornos' next victim was Peter Siems, a 65-year-old retired merchant. His car was found in Orange Springs, Florida, and Wuornos was seen leaving together with him. Her fingerprints were found in the car, but Siems body was never found. The following month, Wuornos killed Try Burress, 50-year-old sausage salesman, who was shot twice.

In 1990, Aileen Wuornos and Moore were seen abandoning Peter Siem’s car, and police were able to track Moore based on witness descriptions. In January 1991 Moore was arrested and agreed to elicit a confession from Wuornos in exchange for immunity from prosecution.

Moore was put in a hotel in Florida and made calls to Wuornos. On January 16, 1991, Wuornos confessed to all murders, claiming that the men were trying to rape her and she killed them in self-defense.

Aileen Wuornos was incarcerated at the Florida Department of Corrections Broward Correctional Institution, on the death row for women. She was later transferred to Florida State Prison for her execution. Wuornos appealed to the U.S. Supreme Court, but her plea was denied in 1996.

In 2002, she began accusing the prison workers of tainting her food with saliva, dirt, and urine. She also claimed to overhear conversations among the prison personnel planning to kill her. She also boycotted showers and food in presence of certain officers.

Before her execution, Wuornos gave several interviews to Nick Broomfield, telling her story. She claimed that she had been tortured with sonic pressure and poisoned with food. Her execution took place on October 9, 2002.