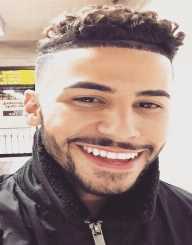 Adam Mohsin Yehya Saleh is one of America’s famous Youtuber and vlogger who ignites the social media with his breathtaking videos. Born on June 4, 1993, he is also a rapper and actor. Saleh who created his YouTubechannel AdamSelahvlog in 2012, currently has more than 2,994,000 subscribers with almost 714,000,000 video views. Best described as the prankster, his main channel, Adam Saleh also has nearly 1.9 million subscribers.

Adam Saleh was born on June 4, 1993, in Brooklyn, New York City to Yemeni parents. He had his education at the Central Park East High School and continued at John Jay College of Criminal Justice.

Adam Saleh started his social media career during his days in school in a collaboration YouTube channel TrueStoryASA, with his friends Sheikh Akbar and Abdullah Ghuman. He then joined another collaborative channel 3MH with other members like Karim Metwaly, Sheikh Akbar, and Slim Albaher. In 2015, 3MH and TrueStoryASA split making Saleh act as solo YouTuber, and he has since then created a lot of videos.

As an actor, Saleh featured in the American buddy cop comedy-drama film American Sharia. The multitalented Saleh showed his musical capabilities when he released the collaborative single Diamond Girl featuring Sheikh Akbar and Mumzy Stranger for the TrueStoryASA channel on May 3, 2015. He followed it with his debut single Tears, a tribute song for his cousin which featured Zack Knight and released on August 16, 2015. The song Survivor was his next single also released on October 18, 2015, and another one Tomorrow's Another Day released on December 4, 2015.

Adam Saleh collaborated video with Sheikh Akbar titled Racial Profiling Experiment uploaded on his channel in October 2014 went viral creating some controversies around the world. The video, which received over 200,000 views, saw Saleh and Sheikh Akbar first wear a European outfit to argue in front of a police officer, but he ignored them. They two then changed their outfit but this time dressed in Muslim clothes and repeated their initial confrontation. Aside from the having massive views on YouTube, the video also caught the attention of the traditional media with people criticising the police officer.

After admitting that the video was staged, The New York chapter of the Council on American-Islamic Relations, which had tweeted that the video was an example of discrimination against Muslims later, demanded Saleh and Akbar to apologise. The council stated that "Muslims are already under the microscope and to do this to gain some cheap publicity is totally unacceptable. There should be no attempt to justify it; they should just apologise and ask people to forgive them for their irresponsible actions."

Adam Saleh also made claims in December 2016, through a video post of being thrown out of a Delta Airlines flight at Heathrow Airport for speaking Arabic. However, some passengers on the plane debunked his claims saying that Saleh was disturbing other passengers. Communication from Delta also stated that Saleh was shouting and provoked other passengers. He claims, however, resurrected the debate over the Right to Fly.