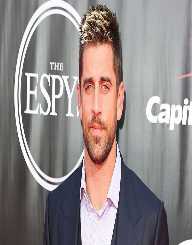 Aaron Rodgers was born on December 2, 1983, in Chico, California, USA. His parents are Darla and Ed Rodgers. His brother, Jordan Rodgers, was a college football player.

As a teenager, Aaron Rodgers attended Pleasant Valley High School. While at this school, he was a member of the football team. He later graduated from this school in 2002.

In 2005, Aaron Rodgers was drafted to play for the Green Bay Packers football team. When he first signed on with the team, he signed a five-year contract. When he first started, he was the team’s backup quarterback. The team’s main quarterback at the time was Brett Favre. Because he was a backup player, he was not on the field as often as he would have liked to have been, but that was expected for a new rookie player. When he did get to go on the field for his first couple of games, he did not do very well, strugglings to throw many touchdowns.

In 2008, after Brett Farve left the Green Bay Packers, Aaron Rodgers became the team’s starting quarterback. This earned him more action on the field, and he was able to prove his skills as he did so. In just his first year as a starter, he was able to pass for over 4,000 yards and almost 30 touchdowns. After this year, the Packers decided to extend Rodger’s contract by another six years.

Aaron Rodgers did about equally as well in 2009 as he had in 2008, passing about the same number of yards. He also led his team to victory for five games in a row at one point in the 2009 season. Because of his great performance in this season, he earned the honor of attending the NFC Pro Bowl as the team’s third quarterback.

In 2010, Aaron Rodgers and the rest of the Packers team started to make their way to the Super Bowl XLV. The team started out strong, winning the first two games of the seasons, but then going on to losing a couple of the next few. The season was especially dangerous for Rodgers, in part because by the halfway mark of the season, he had already had two concussions. Aaron Rodgers didn’t let his injuries hold him back much. He continued to play in many games, doing well enough to earn his team a spot in the Super Bowl XLV. In 2011, along with his teammates, Rodgers helped the Packers face the Pittsburgh Steelers in the Super Bowl XLV, eventually winning the title.

From 2012 to 2014, Aaron Rodgers continued to play well for the Packers, shattering many long-held records in his wake. His team knew they could depend on him. However, in 2015, Rodgers’s game was not as great as it had been in recent years. His passing yards and touchdown numbers were only a fraction of what they had been before. However, in about week 13 of the season, Aaron Rodgers seemed to get his game back. However, at the beginning of 2016, Rodgers seemed to struggle again, in part because of new injuries. However, around week 14 of the season, Aaron Rodgers started to do well again. He eventually ended up with over 4,000 passing yards for the season once again.

With the arrival of 2017, Aaron Rodgers’s game waned in and out. He did well for part of the season but suffered another injury, this time around his collarbone. He eventually needed to take a short break from playing football to have surgery for this injury. When Aaron Rodgers returned to the game, around week 15 of the season, he was technically cleared by the doctors to play. However, only a few weeks later he was put on break because of his injury again. As of 2018, he is still the quarterback for the Green Bay Packers.

All of Aaron Rodger’s awards and accomplishments are due to his football career. Some of his most impressive awards are listed below.