How compatible are Capricorn women and Aquarius men mentally, emotionally and sexually? There are pros and cons to the relationship between the Capricorn woman and Aquarius man. While she is organized and he is unstable, they do share an ambitious nature. They simply reach their goals in a different manner. But if these two zodiac signs are on the same page, they can flourish.

The male water bearer will most likely make the first move on the female goat, for he is a social butterfly and she is more likely found standing by herself in the corner. The Capricorn woman would rather observe the crowd than be a part of it, and he enjoys traveling from group to group discussing new issues.

As an air sign the Aquarius man loves a good debate, and when he comes across the earthy Capricorn she holds her ground in their conversation. She tries to decipher his scattered thought process while he attempts to bring her out of her shell with his creative ideas.

The one thing the Capricorn female can see is that his quest for knowledge is almost as intense as her work ethic. She appreciates his journey to improve the world and the Aquarius male sees her as a steady foundation off of which he can bounce his theories. And because of this initial connection, she will agree to bring their relationship into the bedroom.

If they are to create a pleasurable sexual union, she will have to put herself more in the moment mentally and he will have to tap into his more sensual side. He can offer her some excitement and she can keep up with him through her incredible stamina. But the Capricorn and Aquarius will both have to keep an open mind if they are to find a balance for maximum gratification. 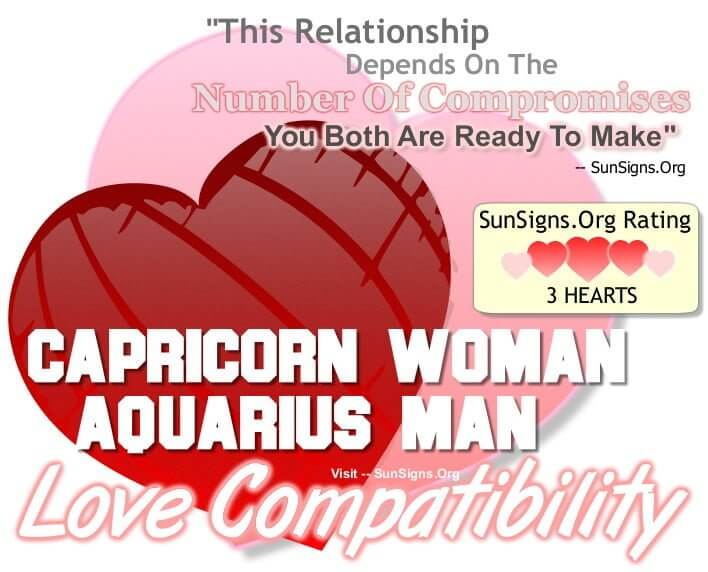 It is in the bedroom where they will have to compromise in their sexual techniques, because the Capricorn woman is all about the physical pleasure and the Aquarius man is all about mental stimulation. She doesn’t care about fantasy or mind games, and he revels in that kind of foreplay.

While the Capricorn women are slow and steady in their approach, Aquarius men are playful and affectionate. She will find this kind of lovemaking frivolous, for she appreciates her tried and true method. He, on the other hand, will grow bored with the same traditional approach over and over again even if they have great love compatibility.

And this is true outside the bedroom as well. While the Capricorn woman works hard to climb the corporate ladder, the Aquarius man is more concerned with his own ideals. While she likes to come home after a hard day and stay there through the weekend, he is ready to be out and about, collecting and sharing information.

She is more steadfast and he is more fluctuating, which can cause a rift in the Capricorn Aquarius partnership. He doesn’t like to stay in one place for very long, and she may be insulted by his flighty nature. And if that happens, she will try to control his erratic behavior. He will not accept her domineering attitude, and it will be a power struggle to see who breaks first.

But both sun signs argue with logic, and the Capricorn woman Aquarius man may find a compromise if they are able to really listen to each other. And if they can find a common goal to rally around, they will come to terms with their mate’s unique way of looking at the world. Once that happens, they will commit to the relationship for life.