How compatible are Aquarius women and Capricorn men mentally, emotionally and sexually? While the Aquarius woman and  Capricorn man appear to have little in common, they can find harmony in their differences. The female water bearer is creative and idealistic and the male goat is ambitious and driven. If they’re able to combine their strengths they can create a lasting union.

Because Aquarius is an air sign, she is always on the move looking for new people to bounce her ideas off of. If the Aquarius woman sees the earthy Capricorn out somewhere she will make the first move to start a conversation. The Capricorn man is usually standing off in the corner coolly surveying the room, and she is intrigued by his quiet strength.

Once they start talking, he’ll be intrigued by her unique perspective on the world, and she will find him to be a great soundboard. While the Aquarius female plays around with different theories he is able to help her organize her thoughts in a more productive manner.

Being the idealist she is, she’s looking to change the world and the Capricorn man has the discipline she needs to get it done. In the same token, she is able to help him dream bigger and brighter, and take him places he’d never dream of by himself. It’s because of this combination the Aquarius Capricorn pair will eventually move their relationship into the bedroom.

Aquarius women are great with thinking outside the box and sometimes that is needed to solve the problem. And when it requires a more classical approach the Capricorn men are there ready. The love compatibility in this relationship can be improved with some work. 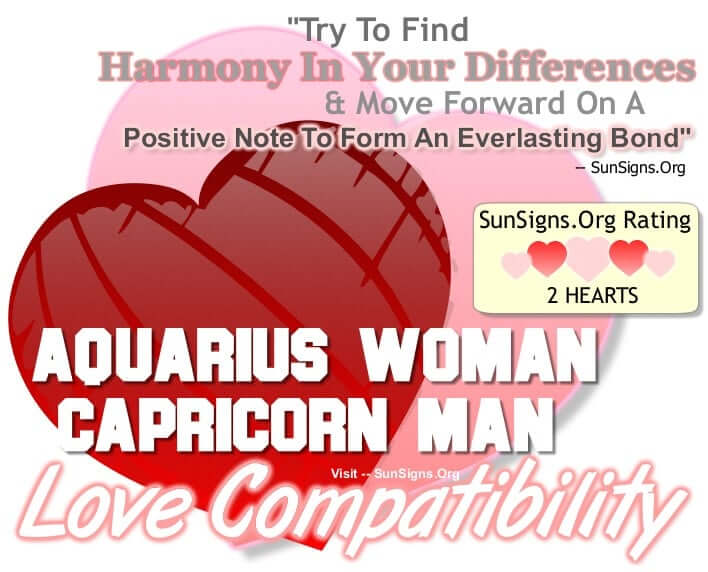 Unfortunately, sex is where the two sun signs will begin to diverge from their complementary union. The Aquarius woman experiences their lovemaking on a mental level while he is all physical. She enjoys mind games and fantasy, but all these things are too frivolous for his tastes.

The Capricorn man prefers a more traditional approach between the sheets, and he has incredible stamina to continue that all night long. But she will grow bored with the same routine over and over again, for she is filled with inventive ideas. He, however, will frown upon switching it up.

He will have to learn to let loose and join her up in the clouds, while she will have to remain grounded with him on occasion. If the Aquarius woman Capricorn man couple can keep an open mind then their partner will help to broaden their horizons.

This is true outside the bedroom as well. The Aquarius female is much more flighty than her homebody counterpart, and she is always off on some grand adventure. He, on the other hand, is home dealing with the more mundane details of life. She hates taking care of the smaller responsibilities, so this works nicely in her favor.

And the Capricorn male automatically takes charge of the household duties. But when he tries to control her and solicit her help in these matters, she will flee the scene. This will create plenty of arguments between the Aquarius and Capricorn, and continue into other areas of their life.

Unfortunately, the one trait they do share is stubbornness, and it’s the one major thing that keeps them from compromising. They will have to learn a little give and take when it comes to their fights, so they can find a solid resolution.

Aquarius is a fixed air sign whereas Capricorn is a cardinal earth sign, the Aquarius woman Capricorn man compatibility gets a TWO Hearts rating. If they can acknowledge their partner’s diversity as complementary to their personality, the Aquarius woman and Capricorn man can build a lasting relationship based on love and respect. She will stay by his side if he flies along with her, and once he’s committed he’s there for life.