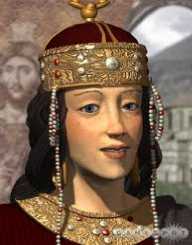 Theodora was a Byzantine empress to Emperor Augustus. She used her influence in the royal court to give more rights to women and children in divorce settlements.

The early life of Theodora is clouded in mist. Popular history suggests that she was born in Crete in 497. She was the daughter of Acacius, a man of Syrian origin. Acacius worked in a circus in the Hippodrome arena. He trained bears for the circus. She was the youngest of the three sisters. In 509 she lost her father. When her mother married another man, Theodora became a dancer at a brothel. She started performing with her elder sister Comito. At the age of 14, she gave birth to a baby who died in its infancy.

In 513 she met a high ranking official while working as a prostitute in a Constantinople brothel. In 517 she became the wife of Hecebolus, the governor of the North African province of Libya. Theodora moved with her husband to North Africa. For unclear reasons, she was divorced and thrown on the Libyan streets. She wandered in Libya until she reached Egypt. She stayed in the capital Alexandria where she met priests of Monophysitism. This was a brand of unorthodox Christianity. She embraced the unorthodox denomination and renounced her earlier practices.

In 522 Theodora returned to Constantinople. She started working as a wool spinner at a shop near the royal palace. She captured the mind of Justinian. Justinian was the crown prince of the Byzantine Empire. They formed a relationship but could not get married. The two were of different social classes. The Byzantine law outlawed mixed marriages between nobility and the commoners. The empress, herself of common descent, opposed the union. The empress died in 524 paving the way for the wedding.

In 525 Emperor Justin I revoked the restrictive clause, and his nephew married Theodora. The wedding was officiated in the church of Santa Sophia.

In April 527 Emperor Justin I crowned Justinian the Byzantine co-emperor. He bestowed him the official title Augustus, Theodora became Augusta. The two were introduced to the empire at the Hippodrome stadium in Constantinople.

On August 1 527 Justinian became Emperor Augustus following the death of his uncle Emperor Justin I. Theodora, the peasant girl, became the Empress of the Byzantine Empire. Theodora was involved in the official matters of governing the empire. She influenced the inclusion of persons in the cabinet. Theodora entertained foreign missions on behalf of the emperor. She even made certain political decisions on behalf of the emperor. She was a co-ruler of some sort.

Even in matters that the two never agreed, the emperor never showed any public disapproval of her opinions. The imperial couple principally differed on two issues. The emperor was preoccupied in conquering the former western European kingdoms of the Holy Roman Empire. Theodora believed that Byzantine power and sustenance depended much on its expansion into the Middle East. The second was their different views on religion. Theodora still conformed to the ideals of her Monophysitism. She even built a church for the denomination in Constantinople. Justinian had his spiritual allegiance in Rome.

Theodora was a woman of immense strong character. She displayed this during the biggest crisis in their reign. On January 13, 532 disgruntled citizens led by some aristocrats rebelled against the emperor in the Nika Revolt. The royal council prepared an exit plan to safety for the imperial couple. They debated on whether Emperor Augustus should abdicate and flee or not.

In the middle of the debate, Theodora stood up and chastised the royal advisors. After her speech, two army generals came up with a counter plan to crush the rebellion. The revolution leaders went into the Hippodrome arena to crown their new emperor. The two generals and their army sealed off the arena. They went in and killed everyone in it. It is estimated that about 40,000 people died in the arena.

After regaining full power, the two started rebuilding the empire to its former glory. In her reign as empress, Theodora had some amendments done on the Byzantine Roman constitution that elevated the status of women in the society. The changes prohibited child prostitution, granted women more material benefit in divorce, and gave women more political space.

Theodora died on June 28, 548 in the capital Constantinople. She was buried in the compound of the Church of the Holy Apostles.

Whether she usurped her husband’s powers or not, Theodora was the most powerful and influential figure in Byzantine history.