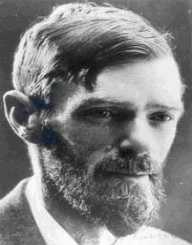 David Herbert Richards Lawrence AKA D. H. Lawrence was born on September 11th, 1885. His place of birth was in Eastwood, Nottinghamshire in England. Lawrence is famous for being a novelist, playwright, poet among other professions. His notable works talk more about dehumanizing effects as a result of industrialization and modernity. Other issues that he focuses on in his books include sexuality, vitality, emotional health, and spontaneity.

D. H. Lawrence was born on September 11th, 1885. He was the fourth born son of Arthur John Lawrence. His mother was called Lydia. His father worked as a miner. On the other hand, his mother was a teacher, and she also had to work in one of the factories to provide for her family. Lawrence's mother encouraged him to venture into literature and also took time to teach him. In 1891, he enrolled with Beauvale Board School after which he completed in 1898. Because Lawrence was a good student, he earned himself a scholarship to school at the Nottingham High School. He graduated from this institution in 1901.

Soon, D. H. Lawrence began working in one of the factories immediately after his graduation. However, he only worked in the plant for only three months and left the job. This was as a result of pneumonia outbreak which also affected his health. Upon recovery, he landed a job as a teacher. He was teaching at the British School which is located in Eastwood. In 1908, Lawrence successfully received a teaching certificate from the University College which is situated in Nottingham.

It did not take time before D. H. Lawrence began writing. In the beginning, he wrote poems. With the help of Jessie Chambers, his friend, he tried his best to have his poems published. Some of his first lyrics were published in 1909 in The English Review. The magazine’s publishers developed a strong liking for his work and encouraged him to write a book with their support. Shortly after this, The White Peacock, his debut novel was published. This publication was done in 1911.

By the end of that year, D. H. Lawrence decided of quitting his teaching job and dedicate his time to writing. The following year, he released his second publication titled The Trespasser. This novel featured a sad love story of one of his teaching colleagues called Helen Corke. In 1913, he published his third work, Sons, and Lovers. This was later regarded as one of the best writings of Lawrence. The novel was ranked as the 9th best novel in the 20th century according to The Modern Library.

When World War I erupted, D. H. Lawrence and his family struggled a lot to earn a living. This is for the reasons that he had gained a bad reputation for his notorious writing. The worst part was that he was not in a position to flee from the country. This meant that he had to struggle with his family with a restriction to stay in England. Regardless of the bitter life experiences that he was going through at this time, he managed to publish four novels in the period from 1916 to 1919.

The end of the war granted him and his wife freedom to tour the world. They went to Sri Lanka, Mexico, New York and Australia. At some point, they spent several years living in New Mexico.

D. H. Lawrence fell head over heels for Frieda Weekley. During this time, Weekley was married to Ernest Weekley. Determined, Lawrence convinced her to leave her husband for him. Lawrence tied the knot with Weekley in 1914.