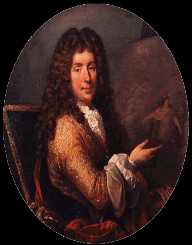 French artist and famous as the decorator of Versailles Charles Le Brun was born on the 24 February 1619 in Paris, France to Nicolas Le Brun and Julienne Le Blé.

As a young man, Charles Le Brun was trained by Simon Vouet who taught him the Baroque style. His first patron was Chancellor Sequier. He was also classically prepared by Nicolas Poussin. Le Brun also visited Italy and had various influential patrons.

Charles Le Brun entered the service of King Louis XIV in 1647 as a Painter and Valet de Chambre. The painting which won him a reputation as an artist of genius was The Family of Darius Before Alexander (1660). In 1664 he was made the First Painter to the King after which his reputation was established, and he won many commissions.

His work at the Palace of Versailles includes the Ambassadors Staircase (1674-78), the Hall of Mirrors (1678-86) and the Peace Room and the War Room (1685-86). Le Brun was also responsible for the decoration of the State Apartments at Versailles and designed the vast majority of the statues in the park at Versailles. Two of his most famous works include the History of Alexander at the Louvre and the History of the King at Versailles.

As manager of the Gobelins Manufacture, Le Brun was responsible for the creation of royal furniture and upholstery. He was also a founding member of the Royal Academy of Painting and Sculpture.