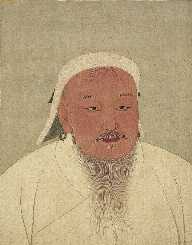 Genghis Khan was the military ruler of the Mongol Empire that stretched from Asia to the central part of Europe.

Genghis Khan was born in the year 1160. This is the general consensus by most scholars of medieval history. His father Yesukai was a tribal leader of the Borjigins in the Mongol nation. His father named him Temujin at birth to commemorate his victory against a local rival with the same name.

When his father died under mysterious circumstances, Khan tried to ascend to the tribal leadership. His efforts were rejected by the clan’s elders. Khan was still tender for leadership. With no powerful figure in the family, Khan and his siblings resigned to a life of poverty. At the age of fourteen, Khan had a scuffle with his older brother Bekhter. He murdered Bekhter and assumed the family’s leadership position.

Two years after being the leader of the family, Khan married his childhood fiancé Borte. This was an arranged marriage to cement relations between Khan’s Borjigin clan and Borte’s Konkirat clan. Khan soon got his first taste of war. His wife was kidnapped by a rival clan. He made an alliance with his friends and rescued Borte. Khan was later captured and enslaved by former allies of the clan. He managed to escape and became an apprentice of his paternal uncle Toghrul. By then his uncle was the leader of the Khereid tribe.

Khans close association with Toghrul infuriated many. His influence among the disjointed Mongol nation was gradually rising. Khan systematically started the dismantling of tribal barriers within the Mongols. He waged conquest wars pacifying tribes in succession. He started with the Jadaran tribe led by his old friend turned nemesis Jamukha.

In 1206, Khan had consolidated his grip on all the main tribes of the Mongol nation. He was bestowed the title Genghis Khan by the council of elders.

Combining both ruthlessness and diplomacy, Khan embarked on an expansion of the Mongolian empire in 1207. He captured the erstwhile small and weak kingdoms. Next to surrender was the Xia Empire. Khan maintained the ruler and named him his governor of the region. The Mongolian leader captured the Uyghur tribal people. The Uyghurs were highly skilled scribes. Khan adopted them in his government. The Mongol Empire got its first written form of communication. By 1215, the Jin Kingdom was annexed into the Mongolian empire. The capital of the Jin dynasty in Beijing was maintained.

At the beginning of 1219, Khan sent a diplomatic mission to the Khwarezmid Empire, in today’s Iran. The purpose was to create a trading pact between the two empires. The mission delegation was mistreated and one of them beheaded. The head of the slain was returned to Khan by the Islamic kingdom. The furious Mongols opted for war. By 1222, the Khwarezmid Empire had fallen to the Mongols. Unlike in the past where Khan named the deposed rulers as his proxies, he chose the opposite in Khwarezmid. The ruler Shah Ala da-Din Muhammad was killed and his kingdom destroyed.

His brutality unfolded gain when two kingdoms resolved to rebel. The Xia and Jin kingdoms seceded when Khan was in Khwarezmid. On his return, he destroyed the capitals and annihilated the entire royal families of the two dynasties. The brutal pacification brought tranquility as no one dared to try the same.

Though he waged many wars, Khan was also a pragmatic diplomat. He established his all-inclusive government with proportional representation from the entire empire. He encouraged diversity in knowledge and cultural practices.

Genghis Khan died in 1227. Historians believe he died after falling off his horse. His wife became the transitional ruler until his son Jochi took over.

The mention of Genghis Khan evokes mixed emotions in people. In his native Mongolia, Khan is a monumental hero. To the rest of the world, he is loved and hated in equal measure in the parts that constituted his empire.