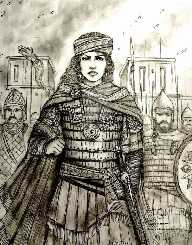 Zenobia was a Palmyra Queen who ruled as regent governor of Rome from 267 to 273. She revolted against the Roman Empire and was pacified.

Zenobia was born around 240 in the Roman colony of Palmyra, in today’s Syria. At birth, she was named Julia Aurelia Zenobia. She was from a noble family that had Roman citizenship status. She was schooled in the classical languages of Greek and Latin. Apart from the two, Zenobia was fluent in the Middle Eastern languages of ancient Egypt and Aramaic. She tended her family’s flocks from an early age. Zenobia learned to ride horses and became a well built and enduring woman.

In 258 Zenobia was married to the regent Roman Governor in charge of Syria, Lucius Odaenthus. She was his second wife. In 266, the governor was assassinated alongside his eldest son during a hunting trip. He was killed by his cousin. Some scholars believe Zenobia killed him along with her co-wife’s son to pave way for her son.

Zenobia declared herself the regent ruler of Palmyra after the death of her husband. Her son was very young to be the governor. Odaenthus was a military genius. He expanded the Roman territory by pacifying the neighboring kingdoms. He was regarded as a future contender for the Roman emperor’s seat. Zenobia maintained her late husband’s structures and policies. She even surrounded her cabinet with intellectual scholars who helped his late husband. She gradually changed her policies to make her more powerful.

An Egyptian rebel, Timagenes started a revolt against Rome. Rome was preoccupied with internal power struggles. In 269, Zenobia invaded another Roman province of Egypt and annexed it to Syria. She used the excuse of the Timagenes' revolt as the reason for the invasion. She got supported by Rome in her invasion. Emperor Quintillus saw Zenobia as the savior of the Roman face in Egypt.

Zenobia used the financial power of her territory to forge alliances with weaker rulers. She particularly made alliances with regional leaders in Asia Minor and the Levant. Zenobia consolidated her power in the Middle East, as Rome got embroiled in coups and counter-coups. By 271 when Aurelian became Emperor in Rome, Zenobia was the undisputed ruler of an expanded Syria. She ruled over a region stretching from Mesopotamia, Antakya to Egypt. She printed coins in her territory that had two facial inscriptions. One side had the Emperor Aurelian’s face, while the other had her son’s face. She coined herself the official title Aurelia, a royal title used only in Rome.

Zenobia continued to rule and revolt gradually from Rome. By 272, Emperor Aurelian decided to reclaim the revolting territory back to the Roman Empire jurisdiction. Aurelian was a career soldier who turned politician. He was battle-hardened by the wars he fought in his rise to the throne. He invaded Syria without any warning. Aurelian invaded the Asia Minor region with the Roman army determined to crush the rebelling cities. He brutally pacified all the cities along the way. Aurelian spared Tyana. Tyana was the birthplace and home city of ancient philosopher Apollonius. Aurelian claimed that Apollonius cautioned him to spare the city if he wished his quest to succeed. The Roman Emperor Aurelian did not fight another battle until he reached Syria.

In 272, the two armies met in the Battle of Immae, which was fought in the city of Daphne. This marked the beginning of the war. Zenobia was defeated and retreated to Emesa. At Emesa, she was defeated again and she escaped to the city of Palmyra. Aurelian laid siege on the city for months. Zenobia hoped for reinforcements from the Persian kingdom which never came. She was captured on the banks of the river Euphrates and taken to Rome. In 274 Zenobia was taken to Rome together with her son.

Her final days are shrouded in mystery. Three schools of thought have come up. One claims that she was paraded in chains around Rome and jailed. The other claims that she starved herself to death rather than be executed. The last one is she was tried, acquitted and later married a wealthy nobleman in Rome. Only time will put the matter to rest.

Zenobia was an ambitious ruler. She systematically gained power from the Romans to build an empire that rivaled Rome. She was the only woman ruler that dared stand against Rome in history. In a patriarchal society like Rome, Zenobia's rise to challenge the emperor was more of a shame to the empire.