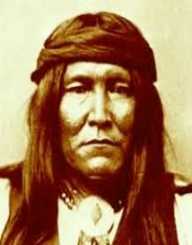 Cochise was a warrior and leader of the Chokonen band of the Chiricahua Apache Native Americans.

Very little is known about the early life of Cochise. He was born sometime between 1805 and 1825. His birthplace was Chiricahua country, an area located in parts of Arizona, New Mexico, and Mexico. His Apache name was A-da-tli-chi or Shi-ka-she, meaning “having the strength of an oak.” When the whites arrived, they gave him the name Cochise. He was a very tall and strong man with long black hair.

In the 1830s, the Mexican government stopped selling goods to the Chiricahua tribes. The tribes then started raiding Mexican territories. The government tried to fight back. Cochise’s father was killed during these confrontations. That gave Cochise the motivation to fight harder. In 1848, he was captured by the Mexicans. He was soon released and exchanged for a dozen of their prisoners. During this time, the Chiricahua tribes had a relatively peaceful relationship with the U. S. government. In the 1850s, Cochise supplied wood for the Butterfield Overland Mail, an American stagecoach service.

Things started to escalate with the Bascom affair in 1861. A group of Apache raiders kidnapped the son of a local rancher. Cochise and his band were wrongfully accused of committing the crime. Lieutenant George Bascom invited him to the Army camps and arrested him. Cochise slashed the tent he was trapped in and escaped. Bascom took many of his relatives as hostages. In return, Cochise took some American hostages. The negotiations between the two sides ultimately failed, and all of the hostages were killed.

This led to more than a decade of constant warfare. The most famous battles Cochise took part in were the Battle of Cookes Canyon, the Battle of the Florida Mountains, the Battle of Dragoon Springs, and the Battle of Apache Pass. The two sides finally signed a peace treaty in 1872. Cochise retreated to the newly-formed Chiricahua Reservation.

Cochise married Dos-teh-seh, the daughter of the Apache tribal chief Mangas Coloradas. She became his principal wife. They had two sons, named Taza and Naiche.

Cochise passed away in his reservation on June 8, 1874. It is assumed that he had abdominal cancer. He was buried high up in the Dragoon Mountains. That area is now called the Cochise Stronghold.

In 1947, author Elliot Arnold wrote a novel about Cochise, called Blood Brother. In 2008, author Melody Groves also wrote a book about him, called Arizona War: A Colton Brothers Saga. The character of Cochise was featured in the films Broken Arrow, Fort Apache, The Battle at Apache Pass, Taza, Conquest of Cochise, and A Million Ways to Die in the West.

He was also featured in episodes of the TV shows Bonanza and Young Justice. A single by the band Audioslave and an instrumental piece by musician Mike Oldfield are both called “Cochise.” The astronauts of Apollo 17 named a small crater on the moon after him. Cochise County, a large area in southwestern Arizona, is named after him.