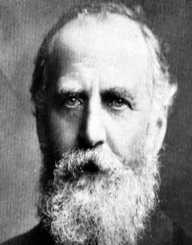 William Thomas Stead was a British journalist and political activist who died in the sinking of the RMS Titanic.

William Thomas Stead was born on July 5, 1849, in the village of Embleton, Northumberland, England. His father was Reverend William Stead, a minister in the local Congregational church. His mother was Isabella Jobson Stead, a woman who led a campaign for the protection of prostitutes. He spent most of his childhood in Howdon upon Tyne. He had a younger brother, Francis, who went on to become a minister and political activist.

William Thomas Stead took lessons from his father at home. He studied Latin, English literature, and the Bible. From the ages of 13 to 15, he attended the Silcoates School near Wakefield.

At the age of 15, William Thomas Stead started working for a merchant in Newcastle upon Tyne. In 1870, he started writing articles for The Northern Echo, a liberal newspaper in the town of Darlington.

The following year, he managed to become the editor of the newspaper despite his young age and lack of experience. He improved the distribution of the newspaper by using the city’s train lines. In 1876, he became known for his coverage of the April Uprising in Bulgaria. He also had a solid influence in the 1880 general elections.

In 1880, Stead became the assistant editor of the Pall Mall Gazette and moved to London. Three years later, he became the editor after the former editor decided to go into politics. Over the next few years, he brought many new changes to the field of journalism.

William Thomas Stead added maps, diagrams, and subheadings to the newspaper and included his opinions in the content. He also became involved in British politics. He pressured the government to give more money to the British Navy and led a campaign against Sir Charles Dilke.

Stead started investigating child prostitution and rape in London. To prove this, he went undercover and managed to buy a 13-year-old girl named Eliza Armstrong. He published his findings in “The Maiden Tribute of Modern Babylon”, a series of four articles. Shortly after that, the government passed the Criminal Law Amendment Act 1885, which raised the age of consent from 13 to 16 to protect girls and women. Even though he did not harm the girl, Stead had to spend three months in prison.

In 1889, Stead quit his job at the Pall Mall Gazette and co-founded the Review of Reviews with Sir George Newnes. Apart from investigative articles, he also started re-writing famous novels into shorter versions and selling them. He employed many female journalists, which was unusual for his time. He later tried to launch another newspaper, The Daily Paper, but it tanked after a few weeks.

William Thomas Stead began to focus on the peace movement. He advocated for pacifism and took part in many peace conferences. He traveled to Russia and Chicago to try to prevent violence, brothels and drinking dens. He published works such as The Truth about Russia and If Christ Came to Chicago.

In 1912, U. S. President William Taft invited Stead to take part in a peace congress at Carnegie Hall. Stead decided to get there aboard the RMS Titanic. When the ship started sinking, he gave his life jacket to another passenger and helped several women and children into the lifeboats.

According to some witness accounts, he was last seen clinging to a raft with American businessman John Jacob Astor. He drowned and his body was never recovered from the ocean. William Thomas Stead was 62 years old.