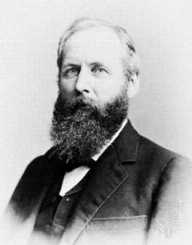 William Morris Davis was an American meteorologist, geologist, and geographer. He is best remembered as the founder of the study of landforms known as geomorphology. Among his other major works was the Triassic basins study of New Jersey and New England.

In 1882, his reports on the study were published. The final report that encompassed all his studies was released in 1898 as The Triassic Formation of Connecticut. The geology professor, Nathaniel Shaler was a great influence on William’s love of geography. The valley of Davisdalen situated in Nathorst Land, Spitsbergen in Svalbard was named after the great man.

William Morris Davis was born on February 12th, 1850. His place of birth was in Philadelphia, Pennsylvania in the United States. He was the son of Edward Davis and Maria Davis. Edward earned a living as a businessman. As a boy, William studied most of the time, unlike his age mates who loved sports.

William Morris Davis was homeschooled by his mother before he joined any school. He was a bright and hardworking student hence performed well in his studies. He earned an admission in Harvard University after his early education. He later attained a degree in Bachelor of Science from the University. Soon after, he enrolled for his Masters in Engineering. By 1870 he attained his master’s degree. Subsequently, he joined the Córdoba Observatory in Argentina as a meteorologist.  Three years later he left for the U.S.

William Morris Davis officially began his career after he rejoined the States. He first joined the Northern Pacific survey. He worked there as Raphael Pumpelly’s field assistant. He later joined Harvard University as an assistant of the Geology professor, Nathaniel Shaler. The professor was a great influence on William’s passion for geography. In 1879, he was appointed as the geology instructor. He served at the position till 1885 when he was promoted to be Physical Geography assistant professor.

His work, The Rivers, and Valleys of Pennsylvania was published in 1889. The publication was among his best work throughout his career. In 1890, he was once again promoted at Harvard as Physical Geography full professor. In those days where promotions were slow and rare, this was a great honor for William.

In 1898, he rose to become the Harvard Sturgis Hooper Professor of Geology. William Morris Davis stepped down from his responsibilities in 1912 and till his death served as a Harvard emeritus. During his time at Harvard, he also served at other universities but as a visiting professor.  He served for a year for instance at Berlin University from 1908. Later in 1911, he was at Paris, a visiting professor for one year. He lectured in France as well during his career.

William Morris Davis was awarded honorary degrees from various universities. These include the Universities of Melbourne, Cape of Good Hope and Greifswald among others. He was the co-founder of the Association of American Geographers.  He then became its president in 1904 to 1905 and later in 1909.

William Morris Davis married his first wife Ellen Warner in 1879. She later passed on. William then married for the second time in 1914 to Mary Wyman. Sadly, he once again lost Mary. In 1928, he married his third wife Lucy who remained with him for the rest of his life.