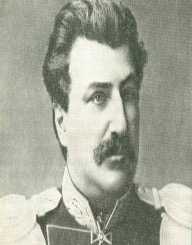 Nikolay Przhevalsky was a well-known Russian geographer and explorer of both Central and East Asia.

Nikolay Mikhaylovich Przhevalsky was born on April 12, 1839, into a noble family. He got his education at the gymnasium in Smolensk from 1849 to 1855. He then attended the General Staff Academy in St. Petersburg, Russia from 1861 to 1863.

After graduation, Nikolay Przhevalsky was commissioned lieutenant and hired as a teacher at Warsaw Military School in 1964. Here he taught history and geography. He also gave public lectures on the history of geographical studies and published a textbook on general geography in 1867.
Alongside his love for geography, he had a passion for travel. As a result, he petitioned the Russian Geographical Society to send him to Irkutsk, Siberia so that he could explore the basin of the Ussuri River. This expedition lasted two years, and upon his return, he published a memoir about his travels.

The Russian Geographical Society was impressed by his expedition and sent Nikolay Przhevalsky to Mongolia and Northern China on what was to be a three-year expedition. During this trip, he collected 5,000 plants, 1,000 birds, 3,000 insects, and 70 reptiles. He also collected 130 different animal skins. He wrote a memoir about this expedition, as well, bringing him international fame as an explorer.

In 1867, Nikolay Przhevalsky started on another journey- one of which that took from Kuldja, China to the peaks of the Tien Shan. During this trip, he claimed to have visited the Qinghai Lake- a lake that had not been visited by a European since Marco Polo.

On a trip in 1879, Nikolay Przhevalsky tried to explore the holy city of Lhasa in Tibet. He was not successful, however, as when he got 260 km away from the city, he was turned away by Tibetan officials.

Throughout his career, Nikolay Przhevalsky achieved many things. He was the first man to witness a specific type of wild hours, which would later be called Przhevalski's Horse. He was also the second man to visit the Qinghai Lake.

Nikolay Przhevalsky was awarded many awards as well. These include the Founder's Gold Medal which was awarded by the Russia Geographical Society. There are also monuments to Przhevalsky in St. Petersburg, as well as a museum about his life and work.

Nikolay Przhevalsky was involved with a woman named Tasya Nuromskaya. Unfortunately, she died of sunstroke while he was away on an expedition.

Afterwards, he was involved with another woman who, to this day, remains mysterious. Her name was never shared; however, her portrait and a handful of her poetry were found in his photo album. There have been claims that Przhevalsky might have been homosexual and that he may have had relationships with his young male assistants throughout the years.

It is unknown if he had children or not, as there is little on record about his later personal life.

In 1888, Nikolay Przhevalsky became ill with typhus after drinking contaminated river water. This sickness was fatal, and he passed away that year.